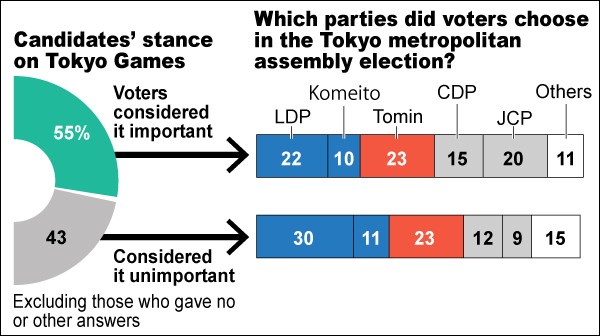 Fifty-five percent of voters in the Tokyo metropolitan assembly election were swayed by candidates’ stances toward the Tokyo Games, compared with 43 percent who felt the issue was unimportant, Asahi Shimbun exit polls showed.

The Liberal Democratic Party gained more votes from those who did not take into account candidates’ stances on holding the Tokyo Olympics and Paralympics during the COVID-19 pandemic, helping it to again become the leading party in the assembly on July 4.

However, the LDP failed to gain a majority in the 127-seat assembly, even with the seats won by election ally Komeito.

Neither the LDP nor Komeito referred to the sports extravaganza in their campaign platforms, but they have strongly backed staging the events from the outset.

Tomin First no Kai (Tokyoites First), a regional party to which Tokyo Governor Yuriko Koike serves as special adviser, has pushed for holding the Olympics and Paralympics, already delayed by a year because of the COVID-19 pandemic, without spectators.

The party lost its status as the leading force in the assembly in the election.

The Japanese Communist Party has called for canceling the Games while the Constitutional Democratic Party of Japan has advocated either a cancellation or another postponement.

The survey was carried out at 543 polling stations in 41 of the 42 constituencies, excluding Kodaira, where candidates won seats without voting, and received 21,185 valid responses.