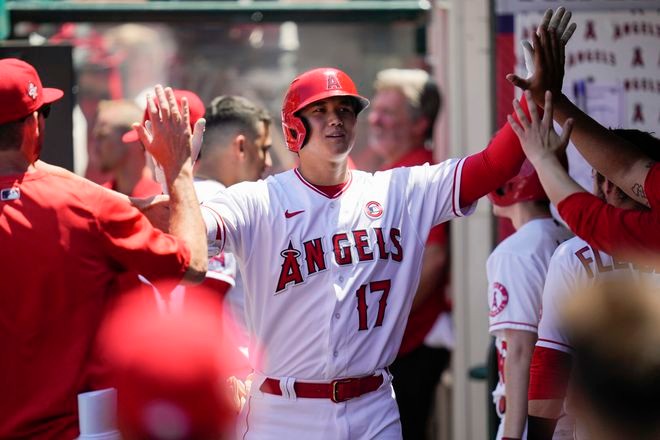 Los Angeles Angels designated hitter Shohei Ohtani (17) celebrates in the dugout with teammates after hitting a home run during the third inning against the Baltimore Orioles on July 4 in Anaheim, California. (AP Photo)

In Major League Baseball, there are some longstanding, unspoken rules that are not spelled out in the official rules book.

For batters, for instance, any flashy performance after hitting a home run is a no-no.

According to "The Unwritten Rules of Baseball" by Paul Dickson, there once was a star slugger who not only looked unhappy after he hit the ball out of the park, but would even return to the dugout with a long face, like he'd done something wrong.

The bar appears to have been lowered since then, but U.S. ballplayers still act with greater reserve than their Japanese counterparts.

As for fans, one unwritten rule is that they can only root for one team if there are two teams in their region.

There is no MLB rule against anyone playing in the All-Star Game as a batter as well as a pitcher, but nobody has done that--until Shohei Ohtani of the Los Angeles Angels was voted this year as the first two-way All-Star in history.

The delight of being able to follow Ohtani's amazing performance almost every day on TV is akin to enjoying a baseball manga series.

And to continue this manga analogy, the relative mediocrity of his team is obviously a vital factor. I even feel as if everyone is my teammate.

Two-way players have always been subjected to doubts and they still are. True, I worry about whether they can pull themselves together after getting clobbered on the mound.

But in Ohtani's case, my anxiety vanished when he blasted multiple homers the very next day following a big loss.

As of July 4, he was leading both leagues with 31 home runs.

Dickson quoted a well-known manager who had warned that if a player keeps feeling proud of his performance yesterday, he isn't doing his best today.

This maxim is probably unnecessary for Ohtani, who seemingly keeps setting new records every day.