Search and rescue operations continue at the site of a massive rain-triggered landslide in the Izusan district of Atami, Shizuoka Prefecture, on the morning of July 6. (The Asahi Shimbun) 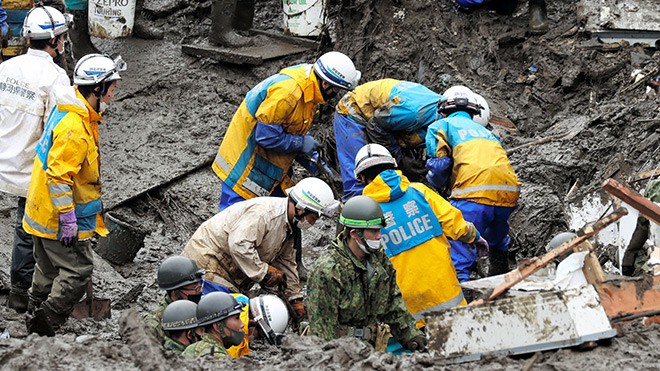 Police officers and Self-Defense Forces personnel search an area near a collapsed house in Atami, Shizuoka Prefecture, on the morning of July 6. (Nobuo Fujiwara)

The prefecture's disaster response task force announced on the afternoon of July 6 the names and genders of five additional people reported to Shizuoka prefectural police and local fire departments as missing.

They have been missing since a landslide triggered by heavy rains engulfed Atami city’s Izusan district on the morning of July 3.

The task force made the announcement after obtaining consent from their families or acquaintances who notified authorities, according to police.

Police have also confirmed that six more people are likely missing and intends to make an announcement after gaining consent from those who reported them to the authorities.

Atami Mayor Sakae Saito said on the morning of July 6 that the number of missing people fell to 24 after local authorities on the evening of July 5 released the names and genders of 64 people who were unaccounted for since the disaster and are registered at the municipal office.

Officials have confirmed the safety of 41 of them as many people on the list or their relatives contacted the local authorities immediately after they made the information public, Saito said.