Foundation flaw in development eyed as factor in Atami landslide 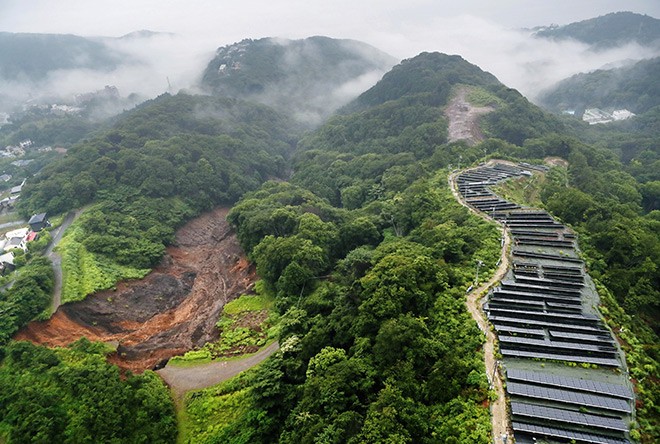 A large landslide on the left side of the photo eventually reached the ocean in the background. (Ryo Ikeda)

Insufficient drainage in the foundation of material used to fill in a valley high above Atami may have helped trigger a massive landslide on July 3 that left at least four people dead and another 20 or so missing.

Even after a valley has been filled in with dirt and soil it will continue to collect groundwater, said Toshitaka Kamai, a professor of applied geology and head of the Research Center on Landslides at Kyoto University’s Disaster Prevention Research Institute.

If the foundation should weaken after absorbing a large volume of water, a landslide could be triggered along areas that had been filled in, Kamai added.

“Filling in a valley is similar to constructing a dam,” Kamai said. “Unless a measure is taken to release water from the landfill it could lead to a landslide should the embankment collapse after becoming filled with water.”

He added that not only did the collapsed embankment make the scale of the landslide larger by adding soil and dirt along the way, it is possible that its collapse was the landslide's main cause.

According to Atami city officials, a real estate company based in Odawara, Kanagawa Prefecture, purchased the area of about 116 hectares in September 2006. At that time, the area was to have been developed into a residential site.

Six months or so later, the company submitted an application to develop about 1 hectare of the land. The surrounding trees were cut down and sand and dirt brought in to fill a valley.

But when city government officials learned that industrial waste, such as wood chips and tile, was also being buried in the area, they repeatedly asked the company to rectify the problem.

The company did not heed those instructions and by 2011 had decided to abandon the development project.

In February 2011, the owner of a Tokyo-based holding company that included a construction company among group firms, purchased the site. Complying with city government instructions, the site was filled in with the leftover dirt left in the area.

Regarding that instruction, a city government official in charge said the leftover dirt was used because the huge volume meant it would have been much more difficult to remove it from the area.

In response to questions from The Asahi Shimbun, a lawyer for the company owner denied having the area filled in with dirt and soil.

What is clear is that areas that have been leveled by filling in land to construct homes and roads are vulnerable to landslides when earthquakes strike or heavy rainfall is recorded.

Heavy rain triggered by a typhoon in October 2014 led to the collapse of an unauthorized embankment in Yokohama’s Midori Ward. A man living in an apartment at the bottom of the cliff was killed.

In October 2017, a typhoon led to the collapse of an embankment in Kishiwada, Osaka Prefecture, that dammed a river and killed one woman trapped in a submerged car.

(Shigeko Segawa and Takahiro Takenouchi contributed to this article.)