Sources: Only ‘special’ fans will be allowed at top Olympic events 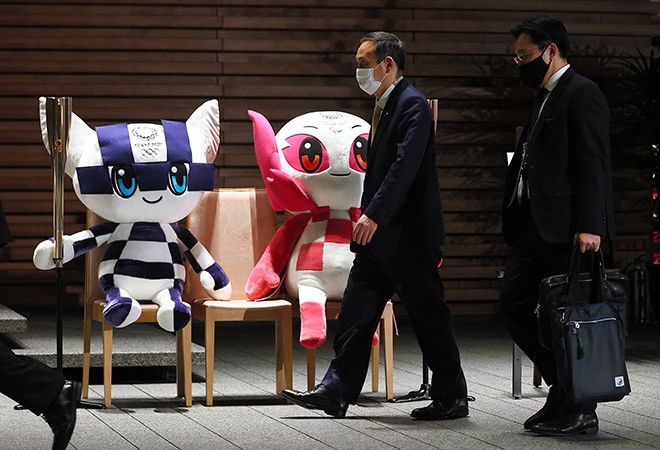 Miraitowa and Someity, official mascots of the Tokyo Olympics, stare at Prime Minister Yoshihide Suga in the lobby of the prime minister’s office on March 3. (Asahi Shimbun file photo)

The government is now moving to ban spectators from late-night Olympic competitions and showcase events held in large venues, including the July 23 Opening Ceremony at the National Stadium, sources said.

Specifically, events scheduled for or after 9 p.m. will be held without fans. The large venues are described as places where a 50-percent capacity would exceed 5,000 people, the sources said.

However, they added that exceptions are being sought for hundreds of “special” guests, such as members of the International Olympic Committee, Olympic sponsors and foreign dignitaries.

Under an earlier agreement, spectators could fill half of the venues for a maximum of 10,000 people.

Under the latest proposed policy, the organizing committee will not need to hold another lottery to whittle down the number of ticketholders, the sources said.

Prime Minister Yoshihide Suga has come under increasing pressure to heed calls from the public and health experts to ban spectators from the Olympics.

Novel coronavirus infections are again rising in the capital, including the spread of the dreaded Delta variant.

In addition, Suga’s Liberal Democratic Party failed to gain control of the Tokyo metropolitan assembly in the July 4 election, a result described as a crushing defeat for the ruling party.

Even the LDP’s junior coalition partner, Komeito, is seeking a spectator-free Olympics.

“The central government should seriously consider banning spectators,” Keiichi Ishii, secretary-general of Komeito, said on the night of the Tokyo assembly election.

Taimei Yamaguchi, chief of the LDP Election Strategy Committee, said he told Suga at a meeting on July 5 that many LDP members want to ban spectators at the Olympics.

A health expert who has advised the central government on its response to the COVID-19 pandemic has also warned about the risk of letting fans into the stands at the Summer Games.

“If the government goes on like this and rushes headlong to (allow fans at the Olympics), it will send a completely wrong message to the people,” the expert said. “And the number of new infection cases will absolutely go up.”

Suga has long expressed his desire to have people in the stands for the sports extravaganza in the capital.

Now, it appears only a certain type of spectator will be able to fill seats.

Members of the IOC and the “Olympic family” will be allowed to attend the Opening Ceremony, as well as all sporting events, under a “special quota,” the sources said. Foreign dignitaries, diplomats and Olympic sponsors will also fall under the category.

The National Stadium will be filled with 10,000 or so “special quota” people for the Opening Ceremony. People who won a lottery two years ago and paid as much as 300,000 yen ($2,700) to see the ceremony will be denied entry.

Concerned that such a plan would draw fire from the public, some government officials are seeking ways to reduce the number of special quota people to several hundred for the Opening Ceremony.

Nonetheless, Suga and his close allies hope that opposition to the idea of letting in spectators will ease with the new policy.

A top official at the prime minister’s office also said the outcome of the Tokyo metropolitan assembly election had nothing to do with the latest decision.

The government would discuss holding the Olympics with no spectators “only at a time of emergency,” the official said.

A central government official who is in charge of promoting the Summer Games touched on the internal battle over the spectator issue.

“The truth is, completely eliminating spectators from the events is the best thing to do,” the official said. “But the people involved, after preparing so much for the Olympics, are opposing it.

“We have no choice but to let the special quota people, like IOC officials, in the venues,” the official said.

And as long as these special people are allowed to watch the competitions live, it will be hard for the government to do the “best thing” and completely shut out the general public from the Games, the official added.

(This article was compiled from reports written by Junichiro Ishii and Taro Ono.)