More than 1,000 residents still in temp housing from 2018 floods 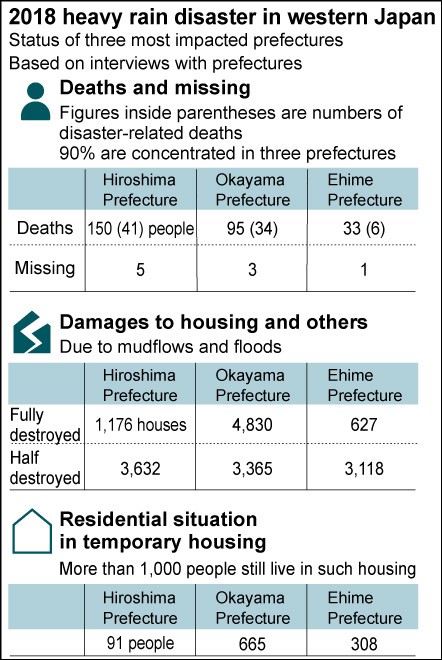 Three years after heavy flooding devastated western Japan, the aftereffects are still being felt, with over 1,000 residents still living in temporary housing in Hiroshima, Okayama and Ehime prefectures.

A total of 1,064 evacuees still reside in temporary housing with 665 in Okayama Prefecture, 308 in Ehime Prefecture and 91 in Hiroshima Prefecture.

Although the figure dropped from about 4,000 in 2020, many of the evacuees continue living in difficulty amid the prolonged coronavirus pandemic.

During the 2018 disaster, one of the worst flooding disasters in decades in western Japan, record-breaking downpours continued for long hours in wider areas.

Special heavy rain warnings were issued for 11 prefectures from the Tokai region to the Kyushu region.

More than 300 residents lost their lives, including those indirectly killed in the disaster, in 14 prefectures across the nation. Ninety percent of the deaths and missing occurred in Hiroshima, Okayama and Ehime prefectures.

Many rivers were flooded by the unprecedented rainfall due to the linear rainbands, triggering landslides and mudflows that wreaked widespread damage.

In Kurashiki city’s Mabi district in Okayama Prefecture, rivers were flooded in succession. About 30 percent of the district was inundated, claiming 51 lives in the flooding.

In Saka and Kumano towns in Hiroshima Prefecture, mudflows killed a number of residents.

In Seiyo and Ozu cities in Ehime Prefecture, the Hijikawa river was flooded due to the release of water from an upstream dam, resulting in some deaths to residents.

The floods were the first disaster on which the Japan Meteorological Agency cited global warming as a contributing factor.

In the disaster-hit areas, housing reconstruction has been ongoing.

In Okayama and Hiroshima prefectures, construction of public housing for disaster victims has concluded.

In Ehime Prefecture, where residents started to move into public housing this year, the last unit is scheduled to be completed in September in Ozu city.

Roads, bridges and river embankments are expected to be increasingly restored in fiscal 2021 in the three prefectures, but the reconstruction efforts are behind schedule in Hiroshima Prefecture because of the COVID-19 pandemic.

Hiroshima Prefecture had hoped to finish construction at 2,550 sites under its recovery and restoration plan by the end of March 2021, but the work is expected to continue until March 2022.