Voters elect 41 women to the Tokyo assembly, the most ever 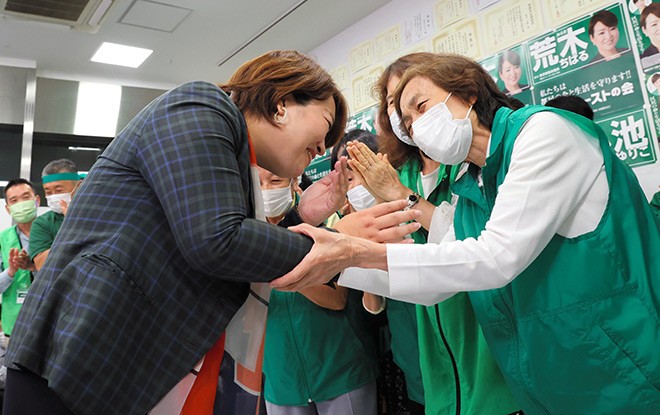 Chiharu Araki, left, who leads Tomin First no Kai (Tokyoites First), reacts with supporters when her election to the Tokyo metropolitan assembly became certain on the night of July 4. (Shiro Nishihata)

Tokyo voters sent a record 41 women to their metropolitan assembly in the most recent election, up five from the last vote.

The July 4 election also saw the largest number of female candidates ever at 76.

Kiyo Seno, a member of the Alliance of Feminist Representatives, a group advocating for an increase in female representation, welcomed the rise in the number of women in the assembly.

“It means that assemblywomen’s voices will be heard more than before and that will make it easy for them to push for their agendas,” said Seno, a former assemblywoman of the capital’s Arakawa Ward.

But she also noted that there is more room for improvement despite the recent leap and pointed out that political parties are taking different approaches toward raising the number of their female candidates.

The JCP was followed by Tomin First no Kai (Tokyoites First), in which 12 out of its 31 assembly members are women.

The election results also showed that a female candidate garnered the largest number of votes in 15 of the assembly’s 42 electoral districts.

As for the share of women among successful candidates, the JCP led other parties at 74 percent, followed by Tomin First on Kai at 39 percent, the CDP at 27 percent, Komeito at 13 percent, and the LDP at 12 percent.