VOX POPULI: Lethal landslide in Atami may be a disaster caused by human error 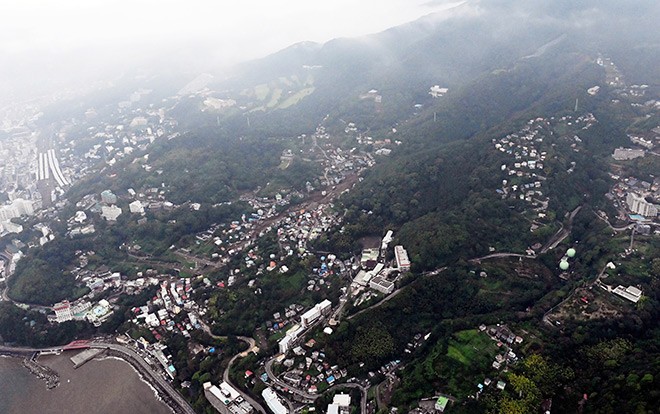 The landslide in Atami, Shizuoka Prefecture, flowed from the upper right of the photo to the lower left before entering the ocean. (Shinnosuke Ito)

Poet and philosopher Magoichi Kushida (1915-2005) was a mountain lover.

In an essay depicting his solo hike up a valley, Kushida noted that as he proceeded upstream, he became aware of the sound of water he hadn't noticed downstream.

It was coming from a small waterfall splashing on rocks. Listening with rapt attention, he thought it "sounded like chamber music," he recalled.

This essay is included in his collection of works titled "Yama no Panse" (Thoughts about mountains).

As valleys form mountainside waterways amid lush vegetation, they should not be blocked by a mound of soil or any other obstruction.

But at the site of a lethal landslide that occurred on July 3 in Atami, Shizuoka Prefecture, attention is being drawn to a massive volume of soil and dirt that had been used to fill in a 200-meter stretch of a valley at the highest elevation above the city.

Experts suspect the disintegration of the landfill added to the scale of the mudslide, magnifying the damage. The prefectural government and other entities have started looking into this possibly human-caused disaster.

One theory is that the landfill turned into a dam of sorts after absorbing a lot of water.

But this dam not only lacked the strength of a concrete dam, it also could not retain water like any natural "green dam" formed by a forest.

How did this "flimsy dam" come to be? Was it a part of some residential land development project, or did it serve as a land-waste dumping site? Wasn't it subject to any administrative supervision?

"Muddy water surged like a tsunami and easily lifted up homes," a local survivor was quoted as telling The Asahi Shimbun.

The comment captured the terrifying destructive power of water combined with mud.

Time is of the essence in searching for survivors, but the work is being hampered by the massive deposits of mud and debris.

Many Japanese surnames, including Tanimura, Tanida and Tanigawa, contain the kanji character for "tani" (valley), indicating that valleys have always welcomed human habitation.

Throughout history, locals must have held the valleys in respect and awe as they watched their beautiful water that surged ominously at times.