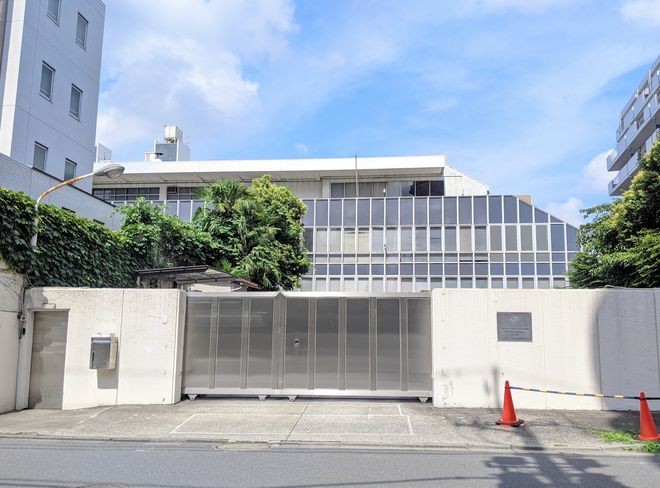 The Trade Representation of Russia in Japan, in Tokyo’s Minato Ward, in June (Shingo Tsuru)

A 70-year-old man is thought to be the latest Japanese targeted by Russian intelligence agents for sensitive information in exchange for cash and other gifts, along with being wined and dined.

Kanagawa prefectural police officials believe the 42-year-old Russian who obtained sensitive information from the man is a spy.

The Russian man who worked for his country’s trade representation in Japan was recently referred to prosecutors on suspicion of committing computer fraud.

His alleged Japanese collaborator was also arrested on the same suspicion. The Japanese man, who has since been released without indictment, has received a total of 10 million yen ($90,000) or so in cash from Russians and has also been wined and dined by them over the course of three decades or so, the officials said.

RUSSIANS HAVE RECRUITMENT DOWN TO AN ART

A probe into the case has provided a glimpse into the techniques of Russian intelligence agents for turning Japanese into their collaborators.

“Anybody who has access to sensitive information has the chance of being targeted,” a senior police official warned.

The Russian Trade Representation worker is suspected of colluding with the Japanese man in 2019 to illegally acquire sensitive U.S. and other data on unmanned fighter jets and radar. The worker allegedly had the Japanese man sign up for a system operated by a database service provider without disclosing the Russian’s intent to take possession of the acquired data.

Part of the data was prohibited by the United States from being sent to Russia, the officials said.

According to investigators and a credit research agency, the Japanese man who helped in acquiring the materials is a graduate of an engineering university, who set up a business for collecting research papers and selling them to corporate clients.

“He was an engineer and a man of few words,” said an acquaintance of the man from the time.

The man, who was arrested on June 9, told Kanagawa prefectural police investigators how he came into contact with Russian agents.

The investigators quoted him as saying it started in the early 1990s when a Russian came to visit him and said he was interested in research papers. The Russian referred the Japanese man to a “colleague” when he was returning to Russia.

The referral process was repeated, and the Japanese man has so far had interactions with a total of 15 or so Russians.

He collected a number of documents as requested and handed the items to his clients in uncrowded places while walking past each other. This method, called a “brush contact,” is considered a standard espionage tactic.

AGENTS LIKELY KNEW HOW HE LIVED

The Japanese man was given detailed instructions when he received requests for documents. He began to receive 100,000 yen to several hundred thousand yen in payments depending on what he provided.

Besides the cash rewards, which far exceeded the expenses it took him to acquire the literature, the man was also wined and dined frequently at Italian and Japanese restaurants and was even given luxury whisky as a gift.

The investigators quoted the man as explaining he collaborated with the Russians for the rewards.

The company he operated was declared bankrupt by the Tokyo District Court in 2003, and he had his private residence seized. He has since been living on a pension with his wife. The Russians were apparently aware of such difficulties in his life.

The man was quoted as telling the investigators that he was unable to cut his ties to the Russians.

Three days after the Japanese man was arrested, the trade representation worker left for Russia without complying with the prefectural police’s request that he present himself. The Japanese man was subsequently released on June 30 without indictment.

“We are perplexed by the reports from Japanese police saying a worker was allegedly involved in illegal activities,” the Russian Embassy in Japan said in a comment it posted on its official Facebook account on June 12, the day the worker left Japan.

Action has been taken against similar espionage cases in Japan on a frequency of once every several years.

The investigators said most of the Russians who have allegedly bought off Japanese are affiliated either with Russia’s Foreign Intelligence Service (SVR) or with the Main Intelligence Directorate of the General Staff of the Russian Armed Forces (GRU).

The SVR is the successor to the former KGB, the Soviet Committee for State Security. It reports directly to the Russian president and is tasked with collecting information on politics, the economy, science and technology across the world.

The GRU, by comparison, is a division of the Russian armed forces and is entrusted with collecting information mostly on military technology. It was the parent organization of the trade representation worker who was referred to prosecutors by the Kanagawa prefectural police in the latest case, the investigators said.

Agents of both entities typically use the same approach. They attend trade fairs for antiterrorism equipment and for arms, where they talk to salespeople and repeatedly take them out for meals. They begin by asking for information that is available to the public.

They go on to request, for example, information on the companies those salespeople work for, and pay them in cash upon receipt. And they later end up demanding classified information.

In some cases, agents take advantage of their target's family circumstances.

A Self-Defense Forces officer was arrested in 2000 for giving top secrets of the Maritime SDF to a military attache of the Russian Embassy in Japan. The officer had a sick son and had joined a new religion.

The military attache showed understanding toward his religion in approaching him and gave him some 600,000 yen over a year or so out of "sympathy" for his son.

“People who have workplace and family problems are often targeted,” the senior police official said. “You are advised to refrain from careless behavior even if someone approaches you with flattering and kind words. Businesses should also be on the alert for espionage.”

September 2000: An MSDF lieutenant commander is arrested by parties including the Metropolitan Police Department on suspicion of violating the SDF Law by leaking internal MSDF documents to a man from the GRU.

August 2008: A man from the SVR is referred to prosecutors by the MPD on suspicion of violating the Passport Law by pretending to be a Japanese who had gone missing in Fukushima Prefecture.

December 2015: A former senior officer with the Ground SDF is referred to prosecutors by the MPD on suspicion of violating the SDF Law by colluding with a GRU man and instigating his former subordinates to bring out an internal document.

January 2020: A former Softbank Corp. employee is arrested by the MPD on suspicion of violating the Unfair Competition Prevention Law by leaking information on Softbank’s phone base stations to a man from the SVR.

(This article was written by Shingo Tsuru, Yoichiro Kodera and Shinjiro Omiya.)