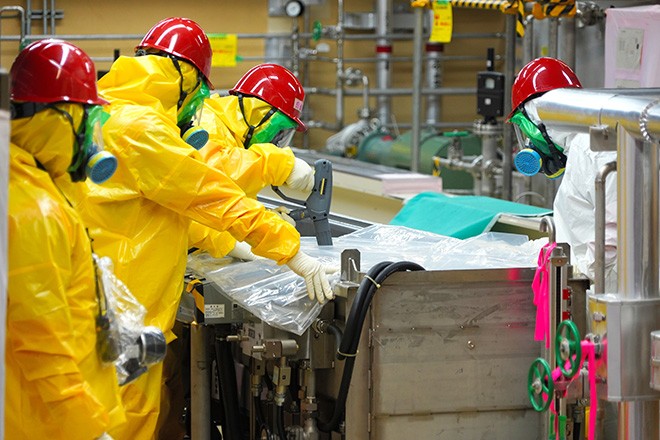 Armed with protective gear, operators remove radioactive substances attached to equipment with a high-pressure washer at the Fukushima No. 2 nuclear plant in Fukushima Prefecture on July 6. (Shigetaka Kodama)

Work to prepare for the decommissioning of Tokyo Electric Power Co.’s Fukushima No. 2 nuclear plant is under way in Fukushima Prefecture, a mammoth project the operator plans to complete in about 44 years.

However, TEPCO has not yet secured a location to dispose of a large amount of radioactive waste, a difficult task that it plans to tackle in the years to come.

The project is expected to prove an enormous challenge to TEPCO as the utility needs to proceed with it while simultaneously taking on the even more formidable task of cleaning up the crippled Fukushima No. 1 nuclear plant.

Together, 10 reactors are housed at the two plants: four at the No. 2 plant and six at the No. 1 plant.

The company will need to train workers for the decommissioning, secure a workforce for the lengthy project that will span decades, and put measures in place to ensure the safety of the facilities when hit by natural disasters such as torrential rain, earthquakes and tsunami.

On July 6, reporters were granted access to the decommissioning work at the Fukushima No. 2 plant so they could show the work to the public for the first time since the process began on June 23.

The No. 2 plant is located on the coastal side of the towns of Tomioka and Naraha, and the work on July 6 revolved around decontamination at its No. 1 reactor building.

Donning protective gear, 12 workers from TEPCO and contractors cleaned up pipes around water tanks with a high-pressure washer in a room for inspecting the equipment that inserts and removes control rods from the reactor core.

The work to decommission the No. 2 plant will be divided into four stages, with each stage spanning a decade or so, according to TEPCO.

In the first stage, operators will focus on decontaminating the facility to prepare for the following stages.

After that, TEPCO expects to move on to the second stage, which involves the demolition and removal of equipment surrounding the nuclear reactors. The reactors will be dismantled and cleared in the third stage, and then finally the reactor buildings in the fourth stage.

“We are determined to steadily and safely proceed with the decommissioning work while gaining support and understanding from local residents,” said Takaki Mishima, the head of the plant.

Perhaps the most crucial question that must be resolved will be where high-level and low-level waste that will be produced from the decommissioning process should be temporarily stored before a permanent disposal site is found.

A total of 9,532 spent nuclear fuel rods--highly radioactive materials--are stored at the plant.

Fukushima officials are demanding they be removed from the prefecture by the time the decommissioning wraps up in fiscal 2064.

But no municipalities in Japan want to accept and house such dangerous materials in their backyards.

To dispose of the waste, it needs to be buried underground at a depth from several meters to more than 70 meters from the surface, depending on the levels of radioactivity.

But as of now, no potential sites in Japan for temporary storage have been determined, not to mention a final disposal site.

“That is a question we will address later,” an official from the utility said.

Although the Fukushima No. 2 plant was damaged by the Great East Japan Earthquake and tsunami of 2011, it was spared from a meltdown and has been idle since.

TEPCO’s decision to pull the plug on the plant came at the insistence of the prefectural government and local residents.

(This article was compiled from reports by Shigetaka Kodama, Tetsuya Kasai, Yu Fujinami and Tsuyoshi Kawamura.)