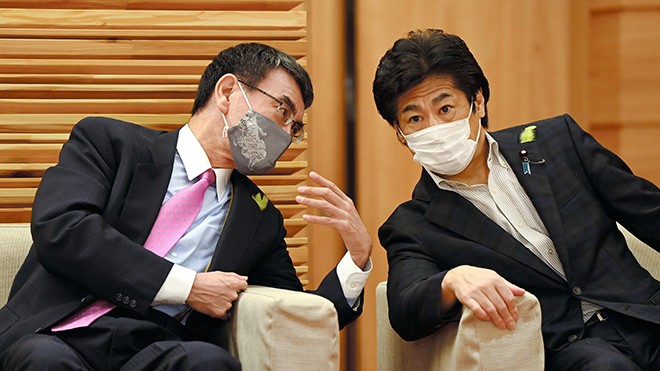 The supply of Pfizer’s COVID-19 vaccines will continue dwindling across Japan until at least September, according to a central government announcement that has done little to ease the frustration and anger among municipal governments.

Many local governments have already stopped accepting reservations for the shots or even canceled bookings because of the central government’s failure to efficiently supply the doses.

“We were told (by the central government) to pick up the pace to vaccinate people,” an Aomori prefectural government official said. “But now it feels like the ladder was removed before we could climb.”

The inoculation process at the local level could become even more clogged under the new supply schedule for August and September, revealed by Taro Kono, the administrative reform minister who is in charge of the COVID-19 vaccine rollout, on July 6.

The government has already reduced the supply quantity for July.

Around 9.36 million Pfizer doses, or 80 percent of the 11.7 million doses, will be categorized as a “base supply” and distributed to prefectural governments in proportion to their populations, Kono said.

Additionally, 1.755 million doses, or 15 percent, will be categorized as “adjustment supplies” for prefectural governments.

Each prefectural government will allocate the adjustment supplies to municipalities.

Kono noted that some municipalities have many clinics and carry an excess stock of Pfizer vaccines, but others do not.

He said prefectural government officials should make adjustments in distribution at their own discretion.

“We will move (the vaccines) from prefectures that have excess stock to those that do not under a long-term vision,” Kono said.

The remaining 5 percent of the two-month supply, or 585,000 doses, will be used at mass vaccination centers run by local governments.

Kono also said Pfizer shipments will be cut by 10 percent for local governments that have more than six weeks’ worth of excess stock as shown by the central government’s vaccination record system (VRS).

However, that VRS has proved ineffective in revealing real-time progress in inoculating the population. Delays at the municipal level in entering vaccination data into the system have led to mess-ups in supply distribution because of outdated information.

Health minister Norihisa Tamura on July 6 said at a news conference that about 90 million doses of the Pfizer vaccine had been shipped to local governments by the end of June.

But according to the VRS, the number of shots given is 50 million.

“That means approximately 40 million doses are in circulation,” Tamura said. “There are mismatches going on.”

The central government hopes the announcement of the two-month supply calendar will help dispel growing concerns among local governments, many of which will start large-scale vaccination campaigns targeting people under 65 this summer.

However, for many municipalities, the new supply schedule is too little too late.

The city government of Hirosaki in the northern prefecture of Aomori had intended to start accepting vaccine reservations for residents under 65 from July 7.

But officials on July 6 halted the plan after learning that the central government would provide only 11,700 doses to the city in late July, despite Hirosaki’s request for 88,000 doses.

The Aomori prefectural government is worried other municipalities will face the same fate because the central government’s late July shipment will be 88 boxes (1,170 doses per box), way below the prefecture’s order of 448 boxes.

The northeastern prefectural government learned that its supply of Pfizer vaccines from July 19 to Aug. 1 will only be about a quarter of its initial order.

As a result, the prefectural capital of Sendai suspended taking new appointments on June 6.

“Out vaccine project has been running smoothly up until now,” a city official said. “It is frustrating.”

Many other municipalities have made those tough decisions.

Major cities, such as Kobe and Osaka, stopped taking reservations for the Pfizer vaccine last week.

Kobe officials have also canceled appointments already made by 50,000 people.