Prosecutor: 100 off hook because they had to take vote-buying cash 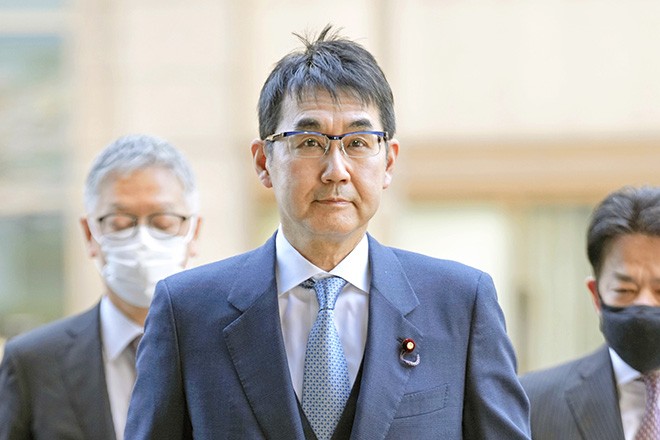 Prosecutors were forced to give a lengthy explanation on why they did not indict any of the cash recipients in a vote-buying scandal that brought down two lawmakers, including a former justice minister.

Their explanation failed to win over some legal experts and could prove unconvincing to a citizen inquest panel.

Around 100 local politicians and support group members in Hiroshima Prefecture were paid cash by Katsuyuki Kawai, the former justice minister, in a bid to round up votes for his wife, Anri, when she ran in the July 2019 Upper House election, according to court documents.

Katsuyuki was given a prison sentence after being found guilty of distributing 28.71 million yen ($260,000) for vote-buying purposes. He has appealed the ruling.

Anri was convicted of conspiring with her husband, forcing her to give up her Upper House seat. Katsuyuki resigned from the Lower House during the course of his trial.

But on July 6, the Tokyo District Public Prosecutors Office announced that the 100 individuals who received the money would not be indicted.

A citizens group in Hiroshima filed a criminal complaint, asking that the recipients also be charged.

Hiroshi Yamamoto, the deputy chief prosecutor, said the 100 individuals were in a “passive position” in relation to Katsuyuki, who was not only a Lower House member but had also served as a special aide to then Prime Minister Shinzo Abe.

That unbalanced relationship meant the 100 individuals could not help but take the money from the Kawais even though they never asked for it, he said.

Yamamoto also said that none of the recipients handed the cash to others to buy votes, as is the typical procedure in vote-buying scandals.

In addition, he said it was difficult to set a standard to differentiate between who should and should not be indicted, so prosecutors decided not to charge any of them.

The Hiroshima citizens group plans to submit a request to a prosecution inquest panel to look into whether other indictments are warranted in the case.

Katsuhiko Kumazaki, a lawyer who headed the special investigation unit in the Tokyo District Public Prosecutors Office before retiring, said the decision not to indict the local politicians was clearly unfair.

“In order to maintain fairness in elections, the common practice had been to investigate and punish both those who gave and received the money,” Kumazaki said. “In that sense, this decision must be described as highly unusual. It cannot be denied that the decision will affect future cases in how investigations and punishments are handled.”

Thirty-two of the local politicians who received money are still in their positions and will be able to seek re-election at the next election.

Under the Public Offices Election Law, politicians found guilty and given at least a fine lose their positions and are banned from running for office for as long as five years.

(This article was compiled from reports by Yuji Harada, Kazufumi Kaneko, Jun Miura and Kae Kawashima.)