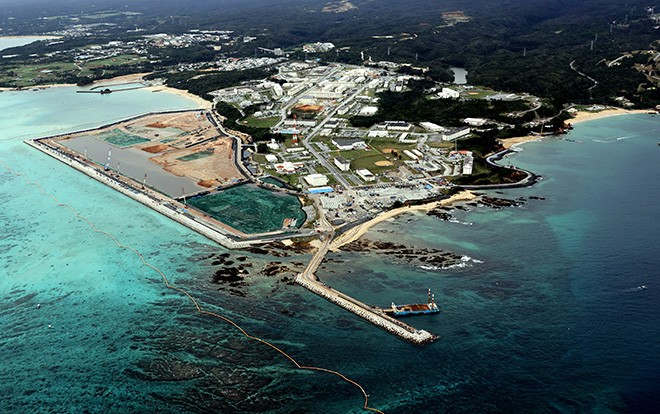 The planned construction site in Nago, Okinawa Prefecture, for a military base to relocate the U.S. Marine Corps Air Station Futenma in Ginowan, also in the prefecture (Asahi Shimbun file photo)

The Supreme Court on July 6 upheld a high court decision siding with Japan’s agriculture minister in a dispute with Okinawa’s governor over the construction of a U.S. base in Okinawa Prefecture.

The minister had ordered the governor to reverse his position regarding a plan to transplant coral reefs for protection in waters near a planned U.S. base construction site off the Henoko district of Nago.

The ruling by the top court effectively means that Governor Denny Tamaki has lost this round in his ongoing fight to thwart the construction of a new base to replace U.S. Marine Corps Air Station Futenma in Ginowan, also in the prefecture.

The southernmost prefecture had issued a permit for the government to reclaim waters off Henoko for the new base in 2013.

But later on, then-Governor Takeshi Onaga retracted a landfill permit after it came to light that the planned construction area contained a weak seabed.

On top of that, nearby coral would be put in jeopardy if the project continued.

The Defense Ministry, which oversees the base project, applied to the prefecture to change the project’s design.

The ministry sought to transplant the coral out of the construction area to proceed with the landfill project.

The court stated that the coral in question is in an area outside of where the soft seabed lies, but they still need to be moved for protection as the landfill project gets under way in that part of the sea. If not, the construction would threaten the species.

The court ruled Tamaki’s refusal to approve the ministry’s request from 2019 amounted to an abuse of his power and that the agriculture minister’s order to reverse his position was legal.

But two of the five justices at the top court gave dissenting opinions, siding with the governor on withholding approval.