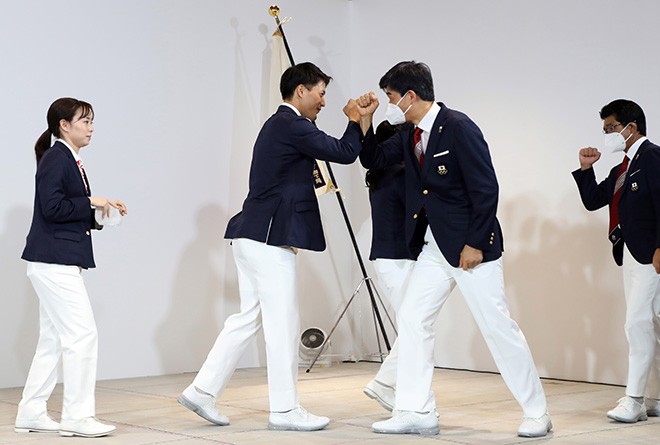 Representatives of the Japanese Olympic delegation elbow-bump each other after a news conference in Tokyo on July 6. (Pool)

Tokyo confirmed 920 new COVID-19 cases on July 7, the first time the daily count topped 900 since May 13, when 1,010 cases were reported, according to metropolitan government officials.

The latest figure was up 206 from a week ago and marked the 18th consecutive day for the daily tally to exceed that of the same day the previous week.

Three new deaths from the novel coronavirus were also reported in the capital on July 7.

The latest infections brought the daily average of new cases in Tokyo over the week through July 7 to 631.7, or 124.3 percent of the figure for the preceding week.

The average number of diagnostic tests conducted in the capital over the three days through July 6 stood at 7,372.3.

The number of serious cases in Tokyo requiring ventilators or extracorporeal membrane oxygenation, also known as an ECMO lung bypass machine, fell by one from the previous day to 62.