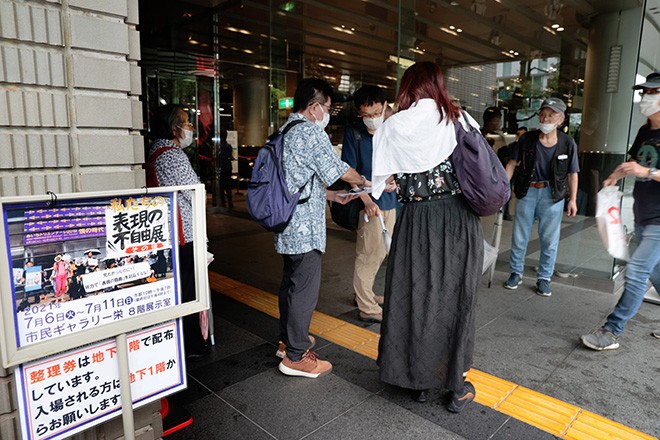 NAGOYA--A suspicious piece of mail exploded at the Sakae municipal gallery here on July 8, which is hosting a controversial exhibition, forcing visitors to be quickly ushered out.

At around 9:30 a.m., what appeared to be a firecracker exploded when a gallery staff member was opening the mail with a police officer present, investigative sources said.

No one was injured in the incident, but prefectural police are searching for any other suspicious items at the gallery.

All visitors who came to see the “After ‘Freedom of Expression?’” exhibit were immediately evacuated to outside the building.

The gallery occupies the seventh and eighth floors of a building in Nagoya’s Naka Ward.

The exhibit space is on the eighth floor, and the staff opened the piece of mail in an office of the managing Nagoya City Cultural Promotion Agency on the seventh floor.

The ward office is also located in the building, but the incident did not halt normal operations there.

An 84-year-old man who is currently showing his photographs on the seventh floor of the building said, “I was surprised by the sudden occurrence.”

He said he was told by the gallery’s staff to evacuate the building shortly before 10 a.m.

About the same time, a 64-year-old man was on the eighth floor, waiting to enter the exhibition space where works from the “After ‘Freedom of Expression?’” are on display.

But he said he was told by staff, “Please go downstairs because police are saying we have to leave the eighth floor.”

The man said he asked why, but the staff just repeated that it was an order from the police.

The gallery is currently displaying the works that resulted in the temporary suspension of the exhibit at the Aichi Triennale 2019 international art festival due to protests and threats.

The gallery opened the exhibition on July 6, which showcases works displayed from the “After ‘Freedom of Expression?’” exhibit, including a sculpture symbolizing “comfort women,” who were forced to provide sex to Japanese soldiers before and during World War II.

The current exhibition in Nagoya was planned by a citizens’ group that protested the suspension of the 2019 exhibit.

But as soon as it opened on July 6, protestors and counter-protestors started staging a rally in front of the building.

Prefectural police have dispatched officers to the site. The exhibit is scheduled to run through July 11.