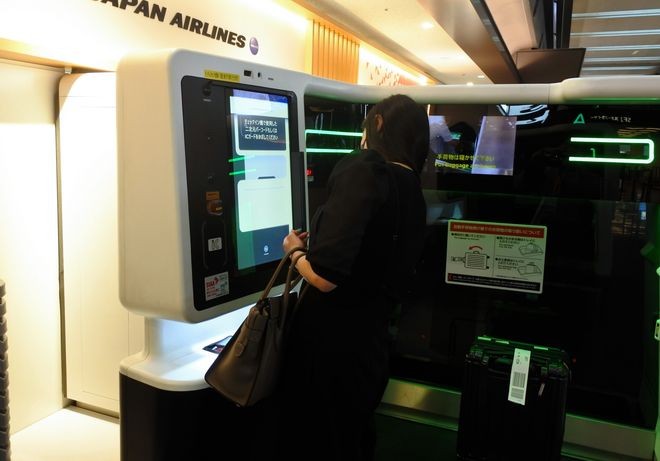 Check-in and other procedures are rapidly being automated and rendered contactless at Tokyo's Haneda Airport to address health issues due to the COVID19 pandemic as well as personnel shortages.

With the summer break approaching, the second since the pandemic flared early last year, aviation industry officials are doing their utmost to reduce chances for passengers to interact with staff at the key gateway to Japan.

Air carriers also began bolstering their anti-virus measures in the run-up to the Tokyo Olympics that kicked off July 23.

Japan Airlines Co. upgraded its automated check-in system at Terminal 1 for domestic flights this past spring. The system scans fingerprints with infrared rays, allowing passengers to operate it while holding their finger several centimeters from the screen.

A zero contact solution has also been introduced for the automatic baggage registration equipment put in service last year. This eliminates the need for people to line up at check-in counters to explain the content of their luggage to staff.

According to JAL, those improvements have shortened the check-in time. The process used to take around 30 minutes during peak periods, but now takes only five to 10 minutes.

A 34-year-old company employee who was dropping off her suitcase welcomed the move, saying, “I now have almost nothing to do at counters and elsewhere.”

The security check venue has also been upgraded. Ticket gates resembling ones at train stations are installed at the entrance. When boarding passes are placed over the scanners, receipts are issued and the gates open.

All Nippon Airways Co. installed 12 automated gates at two locations within Terminal 2 in May.

After clearing the security check, passengers can take electric wheelchairs to the boarding gate. They went into service on a full-scale basis in June at both domestic terminals.

All a passenger needs to do is enter the destination and push the start button. After the user disembarks, the wheelchair autonomously returns to its departure point.

Contactless solutions are not limited to the airport facility itself. ANA in May started fitting its Boeing 787 Dreamliners and some of its other aircraft with new on-board toilet gimmicks.

As the new toilet door’s interior is equipped with a special handle, one can open it with an arm or elbow without touching the component by hand.

Although total passenger numbers for domestic and international routes at Haneda Airport plummeted 76 percent in fiscal 2020 on a year-on-year basis, four times more people visited the airport in April this year than in the same month last year.

Demand is expected to further grow toward summer, and airlines are accelerating their efforts to ensure a contact-free environment.

Hajime Tozaki, an economics professor at J.F. Oberlin University in the Tokyo suburb of Machida who studies the aviation industry, said non-contact systems, like the ones successively introduced at Haneda Airport lately, are bound to become common in the future.

With the COVID-19 crisis fueling the trend, Tozaki noted that making airport procedures entirely contactless “will have significance in dealing with labor shortages and reducing the stress burden on those in the aviation business.”

Of course, there are many occasions when passengers face difficulties operating contact-free systems and have to seek help from airport personnel.

“The impact of system failures would then become far greater,” Tozaki noted. “The question is how to respond to such an event.”

To ensure everything runs smoothly, he said it is “essential to maintain the system in a way in which the experience of airport staff can be taken advantage of.”

At the same time, he cautioned that airport officials need to have a good understanding of the basic mechanisms of the automated systems