Mysterious toad march to top of Mt. Homanzan over once again

A young toad arrives at the summit of Mount Homanzan after an arduous climb. (Video by Seiji Iwata) 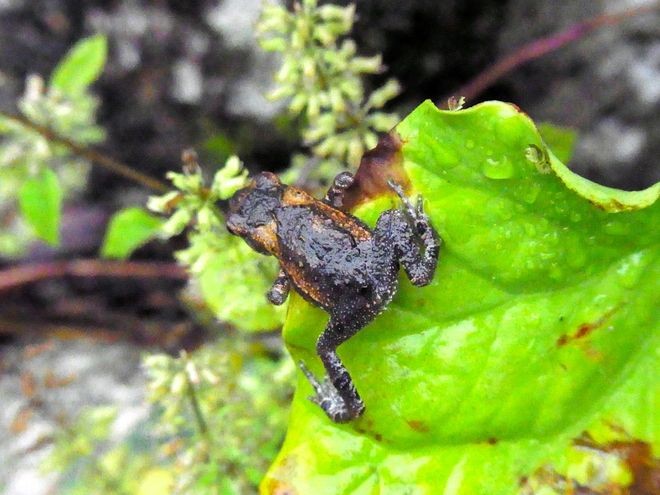 A toad rests on a leaf after conquering Mount Homanzan in Fukuoka Prefecture on July 4. (Seiji Iwata)

DAZAIFU, Fukuoka Prefecture--Well, that's it for another year.

Whatever motivates bufo toads to undertake a seemingly desperate and perilous annual march to the summit of 829-meter Mount Homanzan here, even at risk to their lives, reached its climax in early July.

The toads spend several years on the peak of the sacred mountain before making their descent. They take more than 50 days to reach the summit and encounter numerous hazards along the way, mainly from predators.

The bufos, whose body size doubles as a result of the journey, were warmly welcomed by local hikers on the peak, which once attracted mountain ascetics.

At 8 a.m. on July 4, a 2-centimeter-long toad was spotted ascending the last stone steps leading to the mountain top, then enveloped in fog. It had been drizzling since early morning.

The amphibian smoothly negotiated the 3-meter-high steep slope, finishing the ascent without slipping. It then jumped twice, perhaps in happiness, and headed for the highest hall of Kamadojinja shrine on the summit.

Around five other toads arrived there within the hour, giving hikers an opportunity to snap photos of their amphibian companions.

Toads on Homanzan hatch from eggs in ponds between the first and second stations on the mountain. They start life as tadpoles and then begin the journey to the summit en masse.

No one knows why they do this.

A researcher who is knowledgeable about the species had “never heard of cases of toads outside of Fukuoka Prefecture reaching mountain tops.”

The bufos were designated as a citizens’ heritage by Dazaifu city last year.

The summit of Homanzan is 600 meters higher than the ponds and 2-cm toads must travel 2 kilometers to reach the peak.

According to an estimate by Akira Tanaka, professor emeritus of environmental informatics at Saga University, the toads’ trip is equivalent to a 170-km ascent on a 51,000-meter mountain for a human standing 170 cm tall.

Tanaka, 77, is a member of a group set up to monitor and protect the toads on Homanzan.

During their journey, toads constantly have to be on the lookout for tiger keelbacks, their natural enemy. They also need to be careful not to fall into 30-cm-deep ditches beside the the trail. Only a small portion of the toads overcome these difficulties to conquer the peak.

This year, Tanaka confirmed the start of their immigration on May 8. The first toad reached the summit on July 2, the 56th day since starting out. The travel pace was the slowest since monitoring began in 2016.

The toads initially marched faster than usual, seemingly due to the earlier onset of the rainy season. But Tanaka noted that “it often stopped raining (this year),” prompting the toads to hide on sunny days to prevent their bodies from drying up.

After reaching the summit, the toads spend several years in the mountain's forests. When the breeding season arrives, they leg it down Homanzan to the ponds close to the foot of the mountain to lay their eggs.

As to why the toads make the ascent, there are all sorts of theories. One is that they perhaps want to “retrace the smell of companions stepped on by humans” while another suggests they might be “seeking a less competitive habitat.”

Whatever the reason, only the toads themselves know.

“Because mysteries remain, each person watching the toads can stretch their imagination in their own different ways,” said Watanabe, 78.