Olympic torch arrives in Tokyo as gloom hangs over the Games 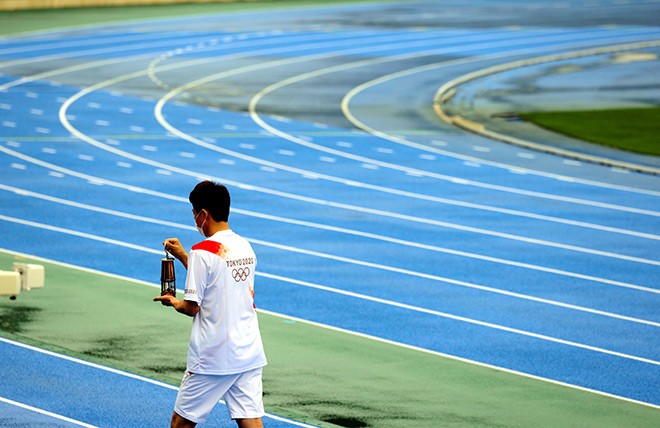 Shuzo Matsuoka, a former professional tennis player, leaves the athletics stadium in Tokyo holding the lantern containing the Olympic flame bound for Machida city, where a lighting ceremony will be held on July 9. (Toshiyuki Hayashi)

Amid cloudy skies and chants of anti-Games protesters, the Tokyo Olympic torch relay started its homestretch in Tokyo on July 9.

A welcoming ceremony was held at the athletics stadium in Komazawa Olympic Park in Setagaya Ward in the morning.

During the proceedings, the Tokyo Metropolitan Symphony played and Tokyo Governor Yuriko Koike sounded a positive note in her speech, a day after it was decided to hold most Olympic events without spectators.

“On some of the public roads, the torchbearers couldn’t run due to the COVID-19 pandemic, but we overcame the difficulties with the strong will and efforts of people across the nation,” Koike said. “I would like to thank all of you sincerely.”

Aki Taguchi, an official ambassador of the Tokyo Olympic torch relay and a former Paralympian shooter representing Japan, held the lantern containing the Olympic flame and handed it to Koike.

Outside the stadium, protesters could be heard over a microphone opposing the staging of the Games.

They chanted, “Put out the Olympic flame,” or “Save lives instead of the Olympics.”

The Olympic flame left the stadium after the ceremony. Later that day, a flame-lighting ceremony was scheduled at Machida Shibahiro plaza in Machida city.

However, due to the rise of the COVID-19 cases, the planned route with the torch being carried along public roads was canceled for all the capital, except for remote islands off Tokyo.

Instead, similar lighting ceremonies will be held at the venues where the relay would have ended each day. In all, the torch will travel around the capital for 15 days.

After the flame makes its way around the Tama area in western Tokyo and the island areas, it will return to the capital's 23 wards on July 17.

The torch is scheduled to complete its four-month circuit at the Tomin Hiroba plaza of the Tokyo metropolitan government building around noon on July 23 when the Opening Ceremony will be held.

The torch relay began in Fukushima Prefecture on March 25 and traveled to 46 prefectures. Many of the scheduled routes on public roads were canceled amid the pandemic.