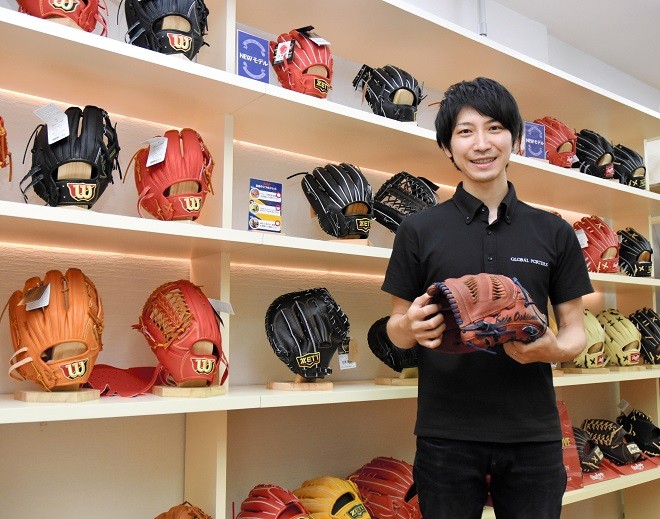 Former high school ballplayer Tomohiro Yonezawaya who went into the sporting goods supply business after his playing days knew how expensive new baseball gloves are, which posed an obstacle for many youngsters.

So, he started a business to collect, repair and refurbish secondhand gloves from players and teams particularly for young athletes, who may not be able to afford top quality new ones.

“There are children who cannot buy gloves for financial reasons but want to continue playing baseball,” said Yonezawaya, 39, who opened Re-Birth’s Kamata outlet in Ota Ward in January. “We wanted to supply gloves at the lowest possible prices.”

His service is attracting attention, as the recycled gloves are expected to contribute to the U.N. sustainable development goals (SDGs) in the sports community.

Situated in Tokyo’s Ota and Setagaya wards, the Re-Birth renovation studio’s outlets collect secondhand gloves from individuals and baseball teams. The inside leather and laces of the gloves are replaced for reuse, so that they can be sold or donated.

About 200 revived gloves from various top brands, such as Mizuno, Zett and Wilson, are displayed at Re-Birth. All boast unique designs.

Baseball gloves are made primarily of quality leather, so new ones carry a hefty price tag of around 60,000 yen ($545).

Because mending the gloves entails expertise, even ones that can still be used are often replaced with new ones.

On top of that, ballplayers at high schools typically need to buy new gloves on several occasions before their fielding positions are finally determined.

Yonezawaya belonged to the baseball club at the Akita Commercial High School. In his third year there, Yonezawaya’s team competed in the opening game at the prestigious National High School Baseball Championship held at Hanshin Koshien Stadium in Nishinomiya, Hyogo Prefecture.

After graduating from college, Yonezawaya worked at a sporting goods chain operator and then joined a major online shopping site provider as a buyer. He found gloves he procured in large numbers left unsold, sold at very low prices or simply disposed of.

Yonezawaya hit upon the glove-refurbishing project when he encountered Satoshi Oki, 24, who has glove-repairing skills, after Yonezawaya founded Global Porters in 2017, a company that handles official goods of professional baseball teams.

Yonezawaya acted on the idea to pitch renovated gloves at one-third the price of their never-used counterparts.

Oki had worked at the same sporting goods chain as Yonezawaya. At the time, he asked glove makers to mend their products but the process required much time.

For that reason, Oki traveled from Fukushima Prefecture, where his workplace existed, to the Kanto region to learn techniques from craftsmen at sporting goods manufacturers. Oki also sent photos to them to solicit advice over the phone.

Spending four years, Oki mastered all the repair procedures and started the Re-Birth studio with Yonezawaya.

Oki each month mends and renovates 100 gloves amassed through the internet and the studio’s outlets. He not only revives worn-out leather but also receives consultations about how to repair and keep better gloves in tiptop shape.

Another “memorial revival” offering has reportedly proved popular as well, under which old beloved gloves that are no longer worn are treated with a special preservation method to prevent degradation for display or converted into pencil and card cases.

As there are reportedly fewer specialized baseball goods shops that can work on damaged gloves these days, Yonezawaya said he believes “nurturing craftsmen is part of our duty.”

Re-Birth is looking to not only increase the number of its outlets but also stage a campaign to donate refurbished gloves to players and groups outside Japan.

“We will show how important it is to continue using things carefully for prolonged periods through reconditioned gloves,” Yonezawaya said. “Via that, we would like to make the baseball community more sustainable.”