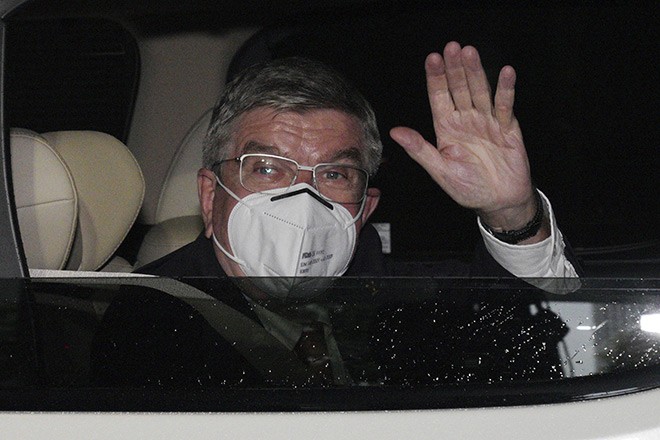 The government formally decided to hold the Tokyo Olympics without spectators at main venues in Tokyo and three surrounding prefectures during a July 8 meeting with representatives of the International Olympic Committee and three other parties after it declared a fourth COVID-19 state of emergency for the capital.

The decision seems to be a reasonable response to concerns about a resurgence of infections in Tokyo and other areas. But issuing a state of emergency means the government recognized the existence of “a situation that could have grave effects on the people’s lives and the national economy.”

The fact remains that the government is forging ahead with the mammoth sporting event despite the health crisis. There is absolutely no reason to place a higher priority on the Olympics than on public health.

Prime Minister Yoshihide Suga has avoided giving straight answers to questions about the wisdom and value of holding the event at such a critical time, saying it is up to the IOC to make the decision. But he has also taken steps to lay the groundwork for the administration’s plans for the Olympics, including winning the support of the Group of Seven leading democratic powers.

If it pushes through its decision to hold the Olympics, a situation described as something not supposed to happen by Shigeru Omi, the chairman of the expert panel advising the government on responses to the pandemic, the Suga administration and Tokyo Governor Yuriko Koike, the head of the host city, must take full responsibility for the consequences.

Organizers need to be ready to suspend or cancel the events even after the Olympic Torch is lit, if things get worse and start threatening to overwhelm the health care system and put people’s lives at risk.

Epidemiologists had recommended that no spectators be allowed. But organizers on June 21 decided to allow spectators while setting a limit of 50 percent capacity--up to a maximum of 10,000 fans--for each Olympic venue. An Asahi Shimbun editorial criticized this decision as reckless and self-righteous disregard for science.

This “50 percent and up to 10,000 spectators” format will be applied to some events to be held at venues in Fukushima Prefecture and other areas. Stricter measures to prevent infections have to be taken at these venues.

After the previous five-party meeting, staff were swamped with preparations for a new lottery for tickets. The local governments of the three surrounding prefectures had to work on plans to deal with spectators and other factors in case events in their prefectures lasted until midnight or later. All these efforts have gone down the drain.

There are many other people and businesses which have been seriously affected by the flipflop on the spectator issue, including Olympic volunteers, those who purchased tickets, hotels and railway service operators.

The biggest problem is that the volunteer, security and transport services for the events need to be reorganized in a short period. That means they will have to be implemented without any rehearsal.

This confusion has been caused by the assumption of organizers that even unreasonable demands should be accepted by people if they are for the Olympics.

The five parties should recognize the fact that their thoughtless behavior has only deepened public disillusionment with the Olympics.

The Paralympics will pose additional challenges for organizers, including special health management measures for athletes. Organizers need to map out convincing plans to tackle them.

If they repeat the mistake they have made with regard to the Olympics, they cannot expect to win public understanding and support for their Paralympics plans.