UN approves extension of aid from Turkey to rebel-held Syria 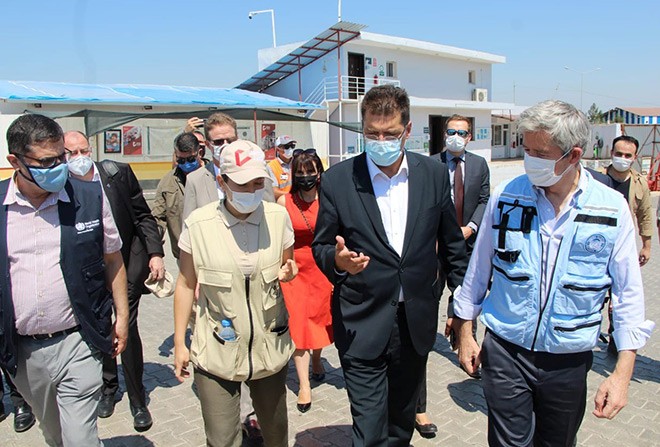 UNITED NATIONS--The U.N. Security Council voted unanimously Friday to extend the delivery of humanitarian aid from Turkey to rebel-held northwest Syria for six months with another six months virtually guaranteed after a U.S.-Russia deal, an agreement the U.N. said will provide lifesaving aid to over 3.4 million people in desperate need of food and other assistance.

The issue of aid to northwest Idlib has been a top priority for the U.S. administration and President Joe Biden raised it at his summit last month with Russian President Vladimir Putin. U.S. Ambassador Linda Thomas-Greenfield traveled to the Bab al-Hawa border crossing in Turkey in early June to spotlight the importance of keeping it open.

Russia’ U.N. Ambassador Vassily Nebenzia called the vote “a historic moment” saying Moscow expects it to become “a turning point” for Syria, the Middle East, the world and hopes “that it might be a turning point that is indeed in line with what Putin and Biden discussed in Geneva." Thomas-Greenfield responded calling it “an important moment in our relationship” that shows what can be achieved “if we work with them diplomatically on common goals.”

The key issue during final negotiations had been whether the council should authorize deliveries through the Bab al-Hawa crossing to northwest Idlib for another year, which the West, U.N. and humanitarian groups said was critical — or for six months as Russia, Syria’s closest ally, had insisted on. The current one-year mandate for aid through Bab al-Hawa expires on Saturday.

The resolution authorizes aid deliveries through Bab al-Hawa for six months until Jan. 10, 2022, with an automatic extension for another six months until July 10, 2022, “subject to the issuance” of a “substantive report” by U.N. Secretary-General Antonio Guterres -- which is all but certain -- on the “transparency” of the aid operation and progress on delivering aid across conflict lines within Syria as Russia wanted.

Thomas-Greenfield said the resolution assures that food, clean water, vaccines and medicines, which now enter Idlib on about 1,000 trucks every month through Bab al-Hawa, will continue for a year.

“Thanks to this resolution, millions of Syrians can breathe a sigh of relief tonight knowing that vital humanitarian aid will continue to flow into Idlib through the Bab al-Hawa border crossing after tomorrow, and parents can sleep tonight knowing that for the next 12 months their children will be fed,” she said. “The humanitarian agreement we’ve reached here will literally save lives.”

Nebenzia called the resolution “a milestone on the path to resolving the Syrian crisis and overcoming its consequences” and said he was grateful to the Americans and all council members for reaching agreement “in spite of all the difficulties and problems.”

But humanitarian and human rights organizations including Oxfam, the International Rescue Committee, Human Rights Watch, Amnesty International and Physicians for Human Rights criticized the Security Council for allowing Russia to only allow aid through a single crossing for six months, with a six-month extension subject to conditions.

Russia and some council members said a second resolution might be needed in January though the U.S., U.K. and others said another resolution isn''t necessary.

Ireland and Norway initially proposed reopening the Al-Yaroubiya border crossing from Iraq to Syria’s mainly Kurdish-controlled northeast. But last week, Nebenzia called that idea “a non-starter,” so they revised their proposal to just keeping the Bab al-Hawa crossing open for a year.

Russia countered Thursday with a rival resolution to keep Bab al-Hawa open for just six months, “with the anticipation of renewal” subject to a report from Guterres on “transparency” in aid deliveries and progress on sending aid directly across conflict lines within Syria. It would have required another Security Council vote when the six-month extension expired on Jan. 10.

Oxfam’s Georges Ghali said, “one crossing point for such a short period of time is woefully insufficient for the scale of humanitarian need.” International Rescue Committee President and CEO David Miliband accused the council of again failing to address ”life-saving challenges” in Syria’s northeast where needs have increased up to 40 percent.

But there was relief among the 15 council members that after months of negotiations and not knowing whether Russia would use its veto to close Bab al-Hawa and end all cross-border aid deliveries not only was a compromise reached but it was unanimously agreed.

Norway’s U.N. Ambassador Mona Juul told the council after the vote that “it is, in fact, the first time since 2016 that we have unanimously adopted this life-saving cross-border resolution.”

Ireland’s U.N. Ambassador Geraldine Byrne Nason said many in the West would have preferred to authorize three border crossings. But “we recognize at all times that this is a political process” that involved “very sensitive, complex” negotiations and Ireland believes keeping Bab al-Hawa open for another 12 months is “a very good outcome for the people of Syria today,” she said.

China’s U.N. Ambassador Zhang Jun said Tuesday that Beijing wanted the council to not only extend humanitarian aid deliveries to Syria from neighboring countries, but to tackle the impact of Western sanctions by the U.S. and European Union and the need to expand deliveries across conflict lines -- issues he again raised after the vote.

“It should be stressed here that unilateral sanctions are the main obstacle in improving the humanitarian situation in the country,” Zhang said.