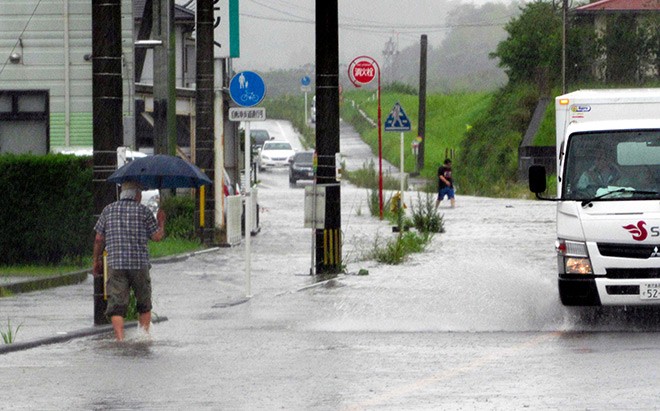 The Sendaigawa river bursts its banks, flooding nearby roads in Kagoshima Prefecture on July 10. (Sunao Gushiken)

Residents of Japan's southern Kyushu region were told to brace for severe storm conditions that only occur once every several decades as torrential rains continued to pound the area.

The July 10 special rain warning for the southernmost Kyushu island was the first this year to be issued by the Japan Meteorological Agency and covered the prefectures of Kagoshima, Miyazaki and Kumamoto.

Officials of the three prefectural governments reported flooded roads and homes in a number of locations, but so far there have been no reports of injuries or fatalities.

The special rain warning was issued for the five Kagoshima municipalities of Izumi, Isa, Satsuma-Sendai, Satsuma and Yusui, as well as Ebino in Miyazaki and Hitoyoshi in Kumamoto, that have a combined population of 250,000 or so.

It was downgraded to a warning about heavy rain by 2:30 p.m.

Special alerts, which have the highest priority with regard to evacuation, urge residents to take whatever steps necessary to stay safe, including moving to second-floor rooms at home if leaving for an evacuation center proves too dangerous.

According to the JMA, as of 3 p.m. on July 10 Satsuma had received 484 millimeters of rain since late July 9, while Ebino recorded 311 mm. Four locations set new records for rainfall.

Officials of the JMA’s Fukuoka Regional Headquarters told a news conference early July 10 that heavy rain will likely continue to fall until July 11. All residents covered by the special rain warning were urged to evacuate immediately.

The JMA forecast as much as 100 mm of rainfall for the 24-hour period until 6 p.m. on July 11 for Kumamoto Prefecture, 80 mm for Kagoshima Prefecture and 60 mm for Miyazaki Prefecture.

(This article was written by Shinichi Fujiwara and Satsuki Tanahashi.)