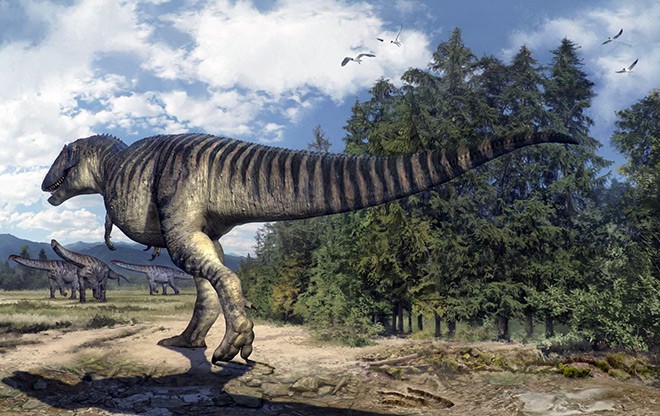 Fossilized footprints of a dinosaur discovered in China were named after Nobita, a friend of the Doraemon robot cat, by a Chinese researcher who is a huge fan of the Japanese manga series.

The tracks feature previously unknown characteristics and were given the scientific name of “Eubrontes nobitai.”

“For me, Nobita, Doraemon and their adventures with dinosaurs are my childhood gems that I still recall fondly every now and then,” said Xing Lida, an associate professor of paleontology with the China University of Geosciences. “I am pleased as Punch to have an opportunity to express my intense affection (for the series).”

In July last year, “strange marks” were found on the surface of a stone along a creek to the south of Chengdu in China’s southwestern Sichuan province.

A team of researchers led by Xing visited the site to study the imprints. The stone had been carried downstream, along with branches and leaves, by heavy rains that pounded the area several days earlier.

The footprints, each with three toes and comprising four steps in all, measure 30 centimeters or so each. They were likely made by a bipedal dinosaur.

The claw marks at the tip of the toe impressions indicated the tracks belonged to a carnivorous dinosaur.

The stride length suggests the dinosaur walked at a speed of approximately 4 kph. The creature had an estimated body length of around 4 meters.

The tracks are believed to date to the early Cretaceous period 125 million years ago.

“Nobitai,” the second part of the name, derives from Nobita Nobi, a schoolboy character in the popular Doraemon manga series, which features the eponymous robot cat protagonist.

“Doraemon: Nobita’s New Dinosaur,” a movie released last year, has a scene where Nobita gives a name to a dinosaur.

Xing said he has been a fan of the Doraemon series since childhood. He said he decided to name the tracks after Nobita to grant the fictional character’s wishes.

Fossils are not always about skeletal remains, teeth and other body parts. They also include “trace fossils,” or vestiges of ancient life, such as footprints, burrows and eggs.

Scientific names are sometimes given to trace fossils when it is not easy to identify the creatures that left their mark on the planet so long ago.

The latest find was also given a name as a new track fossil species on the basis of its distinct characteristics.

The genus name Eubrontes was first given to carnivorous dinosaur footprints discovered in the U.S. East Coast in the early 19th century. More than 10 Eubrontes species have so far been reported from geological formations around the world except Antarctica.

The footprints in China were attributed to yet another Eubrontes species because they have toe orientations and other features that differ from those of earlier finds.

A replica of the Eubrontes nobitai tracks will be exhibited at the National Museum of Nature and Science, Tokyo, from Nov. 30 through Dec. 12.

It will also be shown at the Fujiko F. Fujio Museum in Kawasaki, Kanagawa Prefecture, which is dedicated to the eponymous manga artist who created the Doraemon series.

“Japan was part of the Asian mainland during the Mesozoic era (including the Cretaceous period), so Eubrontes nobitai may have inhabited Japan,” said dinosaur expert Makoto Manabe, a deputy director general at the National Museum of Nature and Science, Tokyo.

“Track fossils only retain characteristics of the soles of the feet, but they allow walking speeds to be estimated from stride lengths and group behavior to be inferred from how the track fossils are clustered,” Manabe noted.

“They may have a lower profile than skeletal fossils, but I hope the discovery of Eubrontes nobitai will prompt more attention to be paid to track fossils as well.”