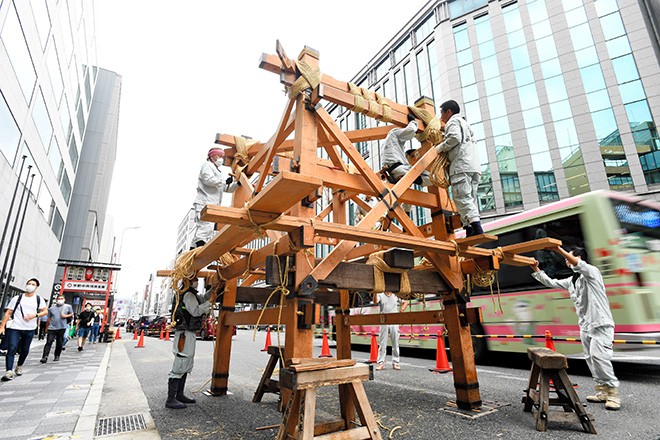 KYOTO--City authorities gave the green light July 10 to begin work on constructing massive, decorative floats for the annual Gion Festival--even though the climactic processions are now canceled for the second straight year due to the COVID-19 pandemic.

Constructing the floats, which takes place on Kyoto streets, is aimed at preventing artisans’ age-old techniques from getting rusty due to non-use.

Floats, some called “yama” and others “hoko,” vary in size and weight. They consist of numerous components, including the roof and wheels.

The largest one stands 20 meters tall and weighs more than 10 tons. Still, only ropes are used to bind the parts to build and complete a float using traditional techniques.

The festival, which runs until the end of this month, has two climatic parts: the Saki Matsuri (first festival) and the Ato Matsuri (latter festival).

In a normal year, 23 floats will be constructed for the first festival. But only 11 will be assembled this year by July 14.

Festival officials left the decision to assemble floats to each of the float-preservation associations, which is community based.

For the latter festival, six of the 11 floats will be built.

Festival officials warned that onlookers should not gather when floats are being built as a precaution against the novel coronavirus.