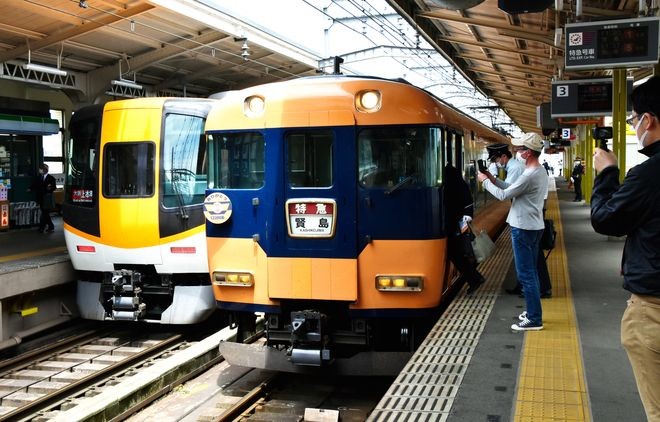 A Kintetsu 12200-series express train makes a stop at Ujiyamada Station in Ise, Mie Prefecture, on April 25 as part of a special service after it was retired from regular use. (Akihito Usui)

The company had been running the model famed for its signature navy blue and orange colors for special services after it was retired from regular use in February.

The 12200-series model was introduced in 1969 for use as limited express trains on the company's main routes. In total, 168 trains were manufactured until 1976, making it Kintetsu's most produced model.

It was designed to offer better comfort to compete with high-speed bullet trains running on the Tokaido Shinkansen Line, which opened in 1964 when Japan hosted the Olympics Games for the first time in Tokyo. It offered reclining seats with a wider seat pitch (98 centimeters between seat rows) than bullet trains.

It also boasted Western-style toilets, rare at the time, instead of the traditional squat-style loos.

Early models were called the "New Snack Car" because they had a snack section installed with a microwave to serve hot snacks and drinks for passengers.

Members of the imperial family frequently used the train because the sacred Ise Jingu shrine in Ise and Kashiharajingu shrine in Kashihara, Nara Prefecture, are located along its routes.

The 12200-series train has been replaced by upgraded models, such as the Ise-Shima Liner and the Shimakaze.

To meet requests from rail buffs, the company ran special services on two routes for four days in April. The treat was well-received with an average passenger occupancy rate of 70 percent, high given the slowdown in the number of users due to the pandemic.

Two trains will make their last runs on Aug. 7, operating round trips between Kintetsu Nagoya Station and Kashikojima Station in Mie Prefecture, and also between Osaka-Uehonmachi and Kashikojima stations.

Although each train can carry around 260 passengers for each one-way trip, the capacity will be limited to 120 to allow for social distancing and avoid close contact with others.

The special services were fully booked in just an hour after the operator started accepting reservations on July 1.

"We have prepared commemorative items because it will be the final opportunity," said a Kintetsu representative. "We got all sorts of suggestions about what to do with the trains, but have no plans to preserve them for display."