A giant calico cat "lives" in a screen set up on top of a billboard on a building in Tokyo’s busy Shinjuku district. (Tatsuya Shimada) 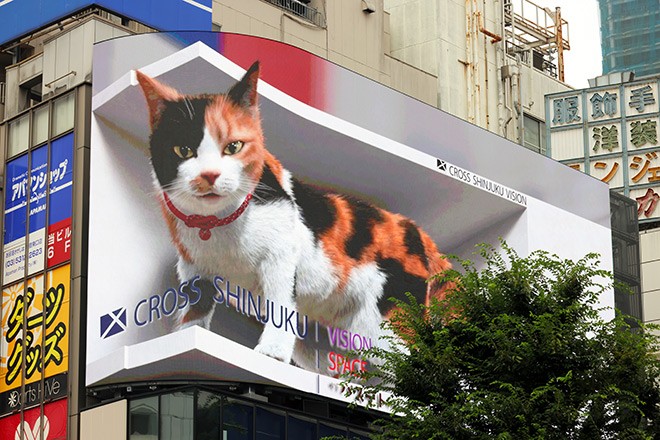 For those with a bad case of felinophobia, don't look up when leaving the east exit of JR Shinjuku Station in Tokyo or your worst nightmare will come true.

A massive 3-D mikeneko (calico cat) has found a new lair on a screen set up on top of a building across from the station.

The feline, a moving image projected on a 120-square-meter advertising billboard, looks so real that many pedestrians freeze in mid-step and gaze up in wonder at the spectacle.

The display is curved so that the cat’s image appears even more 3-D than a usual flat screen.

Full-scale operation of the projection started on July 12, after a preliminary testing period.

It starts in the morning after the feline wakes up.

During the daytime, the cat appears in between advertisements and moves as if it is speaking to pedestrians down on the street and in the station square.

At night, the kitty yawns and goes to sleep.