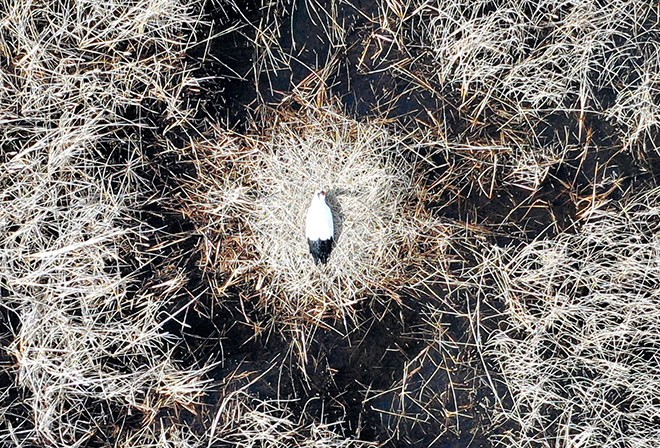 A trimmed image of what is believed to be an incubating red-crowned crane in Hokkaido, photographed by a drone flying at a distance. (Provided by a study team from the Japan Tancho Research Institute and Nature Kenkyukai in Mukawa)

Conservation groups are demanding a plan to build a wind farm in Hokkaido be rescinded after they confirmed red-crowned cranes, a bird species the government designated a special national treasure, are breeding in the area.

The Wild Bird Society of Japan and other nature groups said the project, by a subsidiary of Osaka Gas Co., should be scrapped to protect the rare birds’ natural habitat.

“I would like company officials to fully grasp the significance of the newly discovered habitat,” said Hironobu Tajiri, head of the nature preservation section of the society. “The birds are expanding their habitat now thanks to people’s efforts to protect the species over the past 100 years.”

According to the Wild Bird Society of Japan, a pair of red-crowned cranes were breeding in a marsh sprawling between Tomakomai, a coastal city south of Sapporo, and Mukawa, a neighboring town east of Tomakomai.

A study team dispatched by local conservation groups--the Japan Tancho Research Institute and Nature Kenkyukai in Mukawa (Nature study group in Mukawa)--recently used a drone to take images of the birds brooding over their eggs and looking after fledgling birds.

The team opted to use the drone to maintain enough distance from the birds so as not to disturb them.

The breeding area is on land where the Osaka Gas subsidiary plans to build about 10 large windmills.

Osaka Gas said the planned construction site, which measures 564.7 hectares, is not designated as a natural reserve that requires protection under the law.

The company said it aims to bring the wind farm into operation in May 2026 at the earliest.

In reply to The Asahi Shimbun’s inquiry, Osaka Gas said that it will “assess the environmental impact on the species based on the results of future investigations and scientific expertise.” It also said it will fully explain its position to gain understanding from residents.

The government aims to reach net zero greenhouse gas emissions in 2050 by promoting renewables and other green initiatives.

Osaka Gas said the company has been committed to developing wind power and other renewable energy sources.

But it was not known at the time that the cranes are breeding there.

The environment minister can issue an opinion on a project with an output capacity of 10,000 kilowatts or more, and this one is expected to have a capacity of 38,000 kw.

The Environment Ministry said the project does not have to be immediately canceled, even though the planned construction site encompasses the birds’ breeding ground.

The population of red-crowned cranes has been slowly edging up due to decades of conservation efforts. It was once feared that the species went extinct.

Hokkaido is home to about 1,800 of these birds--more than half the global population of red-crowned cranes, according to conservationists.

Most of them inhabit eastern Hokkaido. The habitat straddling Tomakomai and Mukawa is considered one of the westernmost habitats for the species living in Hokkaido.

The study team has been watching a pair of red-crowned cranes since April, when they spotted them for the first time.

The team said two eggs have hatched, and the adult cranes are raising the two baby birds.