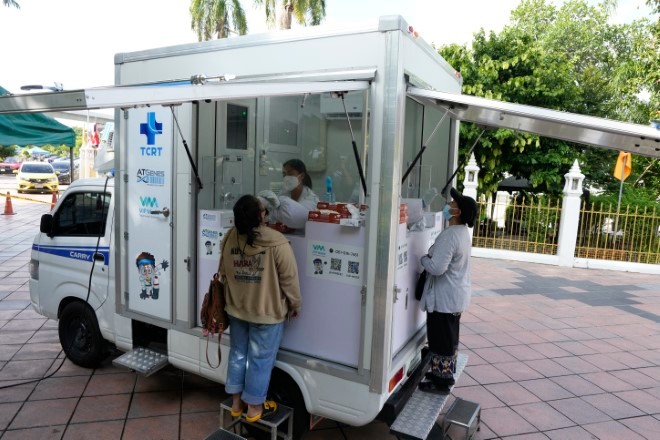 Health workers collect nasal swabs from locals who were waiting through the night for free coronavirus testing at Wat Phra Si Mahathat temple in Bangkok on July 9. (AP Photo)

BANGKOK--Thailand’s immunization strategy against the coronavirus will see a shot of AstraZeneca’s viral vector vaccine administered after one dose of Sinovac’s vaccine, its health minister said on Monday,

The plan, if implemented, would be the first publicly announced mix and match of a Chinese vaccine and a Western-developed shot.

“This is to improve protection against the Delta variant and build high level of immunity against the disease,” Health Minister Anutin said, referring to the variant first detected in Indonesia.

Thailand and neighbors like Indonesia have reported breakthrough infections among medical and frontline workers inoculated with Sinovac’s inactivated virus vaccine.

The majority of Thailand’s medical and frontline workers were given Sinovac’s shots after February with the viral vector vaccine from AstraZeneca AZN.L arriving in June.