VOX POPULI: Safflower’s range of vivid shades is captivating, but beware of thorns 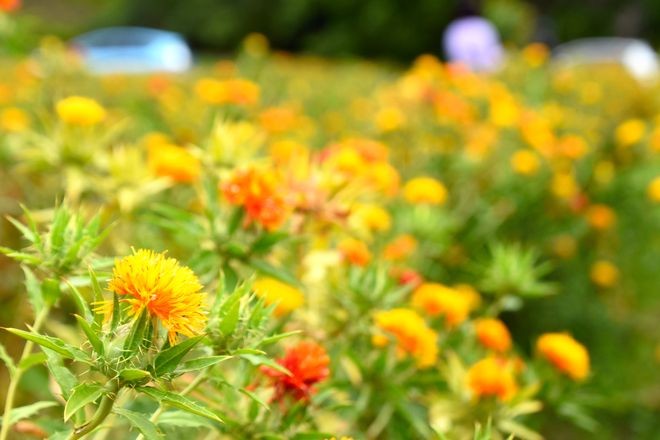 I didn't know that safflowers were thorny until I inadvertently touched one and felt a prick while visiting a safflower field last week in Yonezawa, Yamagata Prefecture.

I was also surprised that the blossoms were yellow, belying the plant's Japanese name of "benibana," which translates literally as "scarlet flower."

"We pick them early in the morning while the prickles are still soft from the morning fog," said Katsuhiko Nitta, 64, a dyer and managing director of Nitta Textile Arts Inc.

The blossoms are all yellow when they open, but acquire a reddish hue a few days later, Nitta explained. And that's when pickers start harvesting them, wearing protective gloves.

Extracting red dye from them involves a complex process. After being washed with water, the flowers are pressed with bare feet and rested on a damp straw rag for a few days. These procedures are called "hanaburi," "hanabumi" and "hananese," respectively.

They are then pounded in a mortar and formed into balls, and laid out in a single layer to dry in the sun.

Nitta's company, ever on a mission to improve the quality of the dye, continues to learn from and refine the traditional process established over the decades.

During the Edo Period (1603-1867), safflowers growing along the Mogamigawa river were transported by boats and traded at high prices. But business declined when Chinese imports and chemical dyes became prevalent during the Meiji Era (1868-1912).

And during World War II, planting ceased because the government deemed it "useless for boosting food production."

Safflower farming was revived shortly after the war, when a handful of seeds preserved by a few farmers miraculously bloomed.

In the company's workshop, I was shown fabrics dyed in various shades as if on a musical scale, ranging from pale pink to deep scarlet.

I was impressed by the sheer wealth of variety of the hues.

Traces of safflowers were said to have been detected in shrouds in which mummies were sheathed in ancient Egypt.

The vivid shades of the dye have captivated the human race across time and space, from the Mediterranean to India, China and Yamagata Prefecture.

Gazing closely at the beautiful and alluring flowers, I pricked myself again. Ouch.