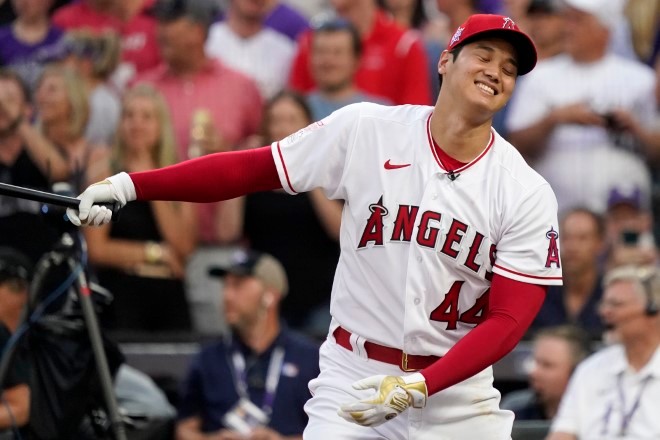 American League player Shohei Ohtani, of the Los Angeles Angels, hits during the first round of the MLB All Star baseball Home Run Derby, July 12, in Denver. (AP Photo)

DENVER--Top-seeded Shohei Ohtani bowed out in the Home Run Derby’s first round, beaten by Nationals star Juan Soto in a scintillating showdown that went to a second tiebreaker.

Ohtani struggled early in his first round but rallied during his final minute to match Soto with 22 homers. In the first overtime, Soto led off and hit six homers over a minute. Ohtani matched that, too.

In the second tiebreaker, each got three swings. Soto went 3 for 3, while an exhausted Ohtani grounded out on his first attempt, ending the match.

Early on, the Los Angeles Angels pitcher/hitter phenom couldn’t get anything in the air and didn’t hit his first homer until 50 seconds had gone by.

Ohtani is the league leader in homers with 33, which is the most at the All-Star break in franchise history.

It’s a big two-day All-Star stretch for Ohtani. He’s the starting pitcher on Tuesday night and will be in the leadoff spot as the designated hitter.

The fourth-seeded Perez finished with 28 homers, which would’ve won the previous two matchups.

Alonso’s burst was the most in the first round, topping the 28 by Josh Hamilton at original Yankee Stadium in 2008.

The New York Mets first baseman stood out at the plate for more than just his swing. Alonso, the fifth seed, wore socks with stars on them and swung a blue-and-orange bat. He also danced to music from New York rappers before his bonus minute and fist-pumped when he was done.

His farthest homer was 514 feet.

Baltimore slugger and No. 6 seed Trey Mancini held off Matt Olson in the opening round of the Home Run Derby as the Oakland first baseman’s tying attempt at the horn curled foul.

Mancini finished with 24 homers, including one that carried 496 feet. The third-seeded Olson went deep 23 times with a few winding up in the third deck.

The 29-year-old Mancini has been one of baseball’s best feel-good stories this season in his return following treatment for colon cancer. Mancini was diagnosed during spring training last year and missed the pandemic-shortened 2020 season.

This is the second Home Run Derby held at Coors Field, with Ken Griffey Jr. winning in 1998. Mark McGwire hit the longest one that day with a 510-footer.

The top-seeded Shohei Ohtani warmed up for Monday night’s Home Run Derby in Denver by hitting one into the third deck in batting practice.

The Los Angeles Angels star had a mammoth blast into the upper-deck in Seattle over the weekend.

The fans were crowded together in left, center and right on a 91-degree night (33 Celsius) as they tried to catch a souvenir. They cheered each ball that left the yard with the biggest ovation coming for Ohtani’s titanic shot to right field just before the players wrapped up practice.

It was a statement homer.

Ohtani kicks off a big All-Star week with the Home Run Derby. He’s also starting the All-Star Game on Tuesday night and batting leadoff as the designated hitter.