Sources: Olympic ticket revenue will dwindle to only a fraction 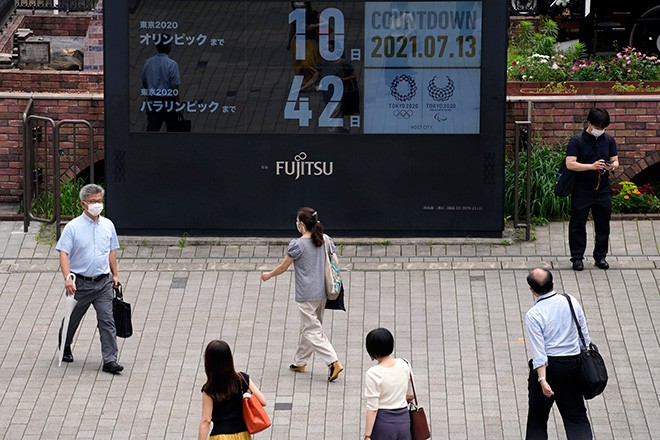 People wearing face masks to help curb the spread of the coronavirus walk past the countdown clock for the Tokyo 2020 Olympic and Paralympic Games near Shinbashi Station in Tokyo on July 13. (AP Photo)

Declaring the Tokyo Olympics to be spectator-free will slash expected revenues from ticket sales, estimated to be about 90 billion yen ($820 million), down to a fraction of only several billion yen, according to sources.

The decision to hold the competitions behind closed doors in Tokyo and three neighboring prefectures, as well as Hokkaido and Fukushima Prefecture, is expected to leave the organizers in the red.

The central and metropolitan governments will likely have a discussion on the financial burden after the Games, as an infusion of public money will undoubtedly be necessary.

The budget for the Tokyo Olympic and Paralympic organizing committee was 721 billion yen as of the end of 2020.

Estimated revenues from ticket sales including the Paralympics was 90 billion yen, or 12 percent of the entire budget.

The proceeds included 15 billion yen as an adjustment of real balances that the metropolitan government would shoulder.

It was already apparent at the end of 2020 that expenditures for the Olympics would exceed revenues.

“We need to discuss a serious challenge among related officials after the Games are over,” Toshiro Muto, CEO of the organizing committee, said on July 11 during a TV program.

An official of the Tokyo metropolitan government said the capital “has been financially stretched as there is no end in sight to the novel coronavirus pandemic” and Tokyo will have to “negotiate hard on the costs with the central government.”

Tamayo Marukawa, the state minister in charge of the Tokyo Olympic and Paralympic Games, said at a news conference on July 9 that the committee, which has a key administrative role in holding the Olympics, “should fully examine the revenues including ticket sales and further scrutinize the spending.”

Due to the pandemic and Tokyo falling under a fourth state of emergency, the organizers decided on July 8 to ban spectators at 724 sessions to be held at 37 venues, or 96.5 percent of the competitions, out of 750 sessions at 42 venues.

Twenty-six sessions at five venues in Ibaraki, Miyagi and Shizuoka prefectures will be held with spectators.

Whether fans will be allowed to attend the Paralympics, which will run from Aug. 24 to Sept. 5, will be decided after the Olympics close on Aug. 8.