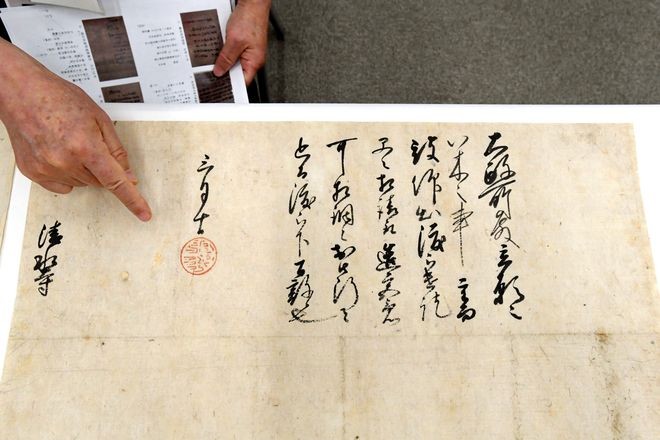 Although the Historiographical Institute of the University of Tokyo made a copy of the document in or after 1886, the original letter went missing at some point.

It was rediscovered while the officials were sorting through 194 old documents at the temple, officials said July 7.

They said the "shuinjo" letter was written on a sheet of traditional Japanese Otaka-danshi paper measuring 62 centimeters by 44 cm.

It was stamped with Hideyoshi's red seal, meaning he penned it himself. The letter was written on March 10, 1589.

According to Teruhisa Sakai, the temple's curator, Hideyoshi wrote that his wish for the recovery of his mother, Omandokoro, from illness had been granted. He also notified the addressee that a gift of rice was on its way as reward and to build a temple.

Historians said Hideyoshi may have donated 300 tons of rice.

"It (the letter) can be utilized to verify the dates of when other letters were written, based on the quality of the paper, the shape of the red seal and other factors," Sakai said.

In another red-sealed letter, he extends his gratitude to Kiyomizudera for giving him two sets of "yukata" light summer kimono when the warlord visited the Arima onsen hot spring resort in present-day Kobe for health treatment.

Another missive says that Hideyoshi's retainer Mashita Nagamori and others donated 30 tons of rice to the temple at the time for the recovery of Omandokoro.

Scholars have already studied a document that says Ashikaga Takauji donated a rice paddy area in Sagami province, in present-day Kanagawa Prefecture, to Kiyomizudera in the hope his clan would continue to prosper. It was written in 1335, before the warlord founded the Muromachi shogunate.

Copies of the documents had also been made.

Other finds included 16 "rinji" imperial orders issued by successive emperors to head priests of Jojuin, a sub-temple of Kiyomizudera, ranging from its founder Gan'a to Zokai, who served in the late Edo Period (1603-1867).

Of them, 15 represented new discoveries.

The imperial orders were apparently issued to grant the title of "shonin," which could only be authorized by the emperor, to successive priests at Jojuin.

The officials said they are considering putting the documents on public display "if the opportunity arises."