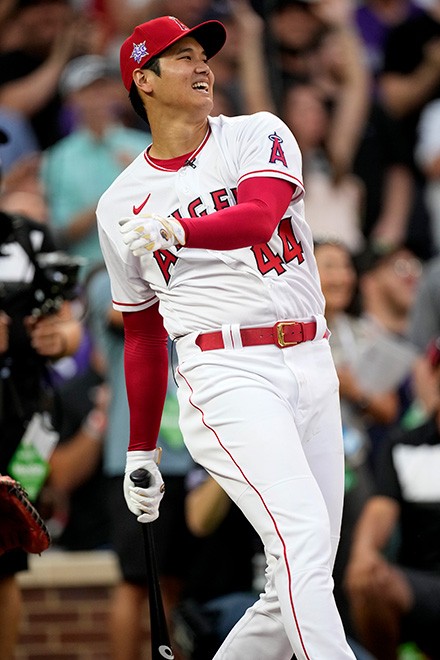 American League's Shohei Ohtani, of the Los Angeles Angeles, hits during the first round of the MLB All Star baseball Home Run Derby, Monday, July 12, 2021, in Denver. (AP Photo)

DENVER--Although Shohei Ohtani and Yusei Kikuchi didn’t play at the same time for their high school in Iwate Prefecture, they are bonding in their first Major League All-Star experience together.

But one of them is already visibly exhausted.

“It was fun,” Ohtani, the 27-year-old player of the Los Angeles Angels who currently leads the season’s home run race with 33, told reporters after losing in the first round of the Home Run Derby on July 12.

“I was really tired. I wish it didn’t go to overtime,” he said about his epic battle against Juan Soto that went to a second tiebreaker.

The two-way superstar, who was named the American League starter in the All-Star Game the following day, said the home run derby required a different level of physicality.

“I don’t swing the bat that much in a day,” Ohtani said.

He likened the competition to interval running and said it was not so much that his muscles were tired. Rather, “I ran out of breath.”

But the slugger loved the festive atmosphere and the standing ovation he received from the fans who packed Coors Field.

“In Japan, a home run derby alone can rarely attract such a big crowd. So I very much enjoyed the experience that is hard to come by,” Ohtani added.

Kikuchi, 30, a Seattle Mariners pitcher, watched Ohtani from the field along with other All-Stars and Home Run Derby competitors. He even served as an impromptu “water boy” during the competition, bringing the exhausted Ohtani a sports drink during a timeout.

The two attended Hanamaki Higashi High School in northeastern Iwate Prefecture and played in the national high school baseball championships, although not on the same team.

Ohtani joined the Angels in 2018, while Kikuchi signed with the Mariners in 2019.

It is the first time for both players to be selected to the All-Star Game. Kikuchi had to pull out from the game on July 12 and was put on the inactive list and his spot was replaced.

Along with starting the game, Ohtani will also bat leadoff as the team’s designated hitter.

He’ll be cheered on by Kikuchi, who traveled to Denver to be part of the festivities although he will not be pitching.

“I never thought we would become teammates on a stage where the world’s top players come together like this,” Kikuchi said. “Usually we are rivals playing in the same league. But for the two days, I want to have a good time having good conversations with (Ohtani).”