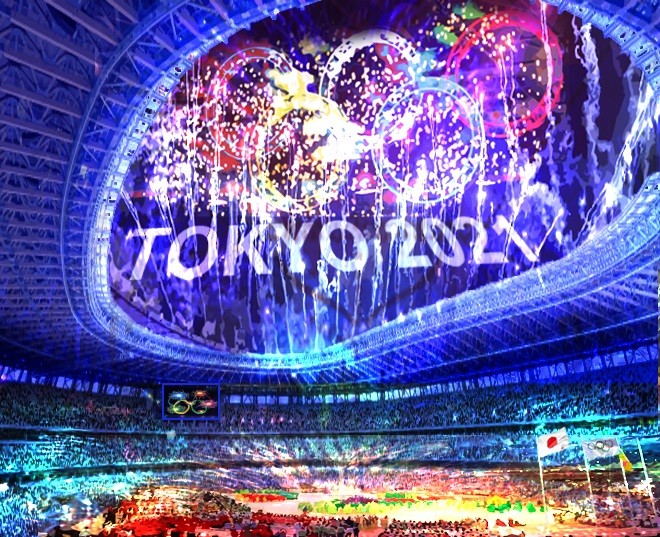 ribbon road
pedaling as fast
as I can
--Roberta Beach Jacobson (Indianola, Iowa)

The haikuist awaits with trepidation. His next haiku is a recollection of cheering at the finish line for a runner who qualified for Tokyo 2020. Singaporean haikuist Asni Amin penned a haiku recalling Rio 2016.

Her arms spread
breaking the goal tape
a spring gale

finish line…
the howling of wind
far behind

The United Nations Assembly observes an Olympic truce from today, the seventh day before the start of the Games of the XXXII Olympiad until the seventh day following the end of the XVI Paralympic Games. Writing from Sofia, Bulgaria, Tsanka Shishkova confirms the original intent.

Olympics
an ancient dream of a world
without wars

Watching from Osaka, Teiichi Suzuki admits this ancient event from Greece could become part of an epic poem because “the opening ceremony … draws many spectators, but it may be difficult in this pandemic situation.”

Observing from Delhi, India, Mona Bedi taught her medical students about the possible spread of new COVID-19 variants. Amrutha Prabhu sent praise from Bengaluru, India, for the international contests of athletes with disabilities that parallel the Olympics. Satoru Kanematsu is proud of his athletic family.

paralympics--
game beyond
name and fame

A clear sky--
son in a wheelchair
plays tennis

Kanematsu in Aichi Prefecture, and TD Ginting in Chiba Prefecture, respectively, were disappointed that there were no fans at the ballpark.

A home run!
no cheers from the stands
COVID spring

Suzuki was disheartened by the image of masked athletes, masked judges and only a few masked spectators.

Isolated
in the stadium--
Olympics

Slobodan Pupovac in Zagreb, Croatia, and Mirela Brailean in Iasi, Romania, respectively, bought a new wardrobe to match the five colors of the Olympic rings.

oil on water
sometimes I think
I see rainbows

waiting
we tilt our heads back
for shooting stars

Kiyoshi Fukuzawa shivered from fear in Tokyo. Mary Vlooswyk watched awestruck at a summer race on the prairies near Calgary, Alberta. Following a trail near her home in Atsugi, Kanagawa Prefecture, Masumi Orihara dared to climb up 1,252-meter Mount Oyama on a summer night. She said the experience was “very scary but a worthwhile experience … pure and refreshing.” Samo Kreutz jumped at the sight of a taxidermist’s handiwork in Ljubljana, Slovenia. Florin Golban got a picture postcard in Bucharest, Romania.

Owls hooting...
threatening me in the dark
deep summer chill

owl and jackrabbit
one needs to be
lightning quick

dead of summer--
feathers by the
dappled cat

Irena Szewczyk spotted a breathless pair of watersport enthusiasts in Warsaw, Poland. Kanematsu’s grandson was surprised by a visitor who flew in to watch him play basketball.

high season
a fisherman and a fish
panting on the shore

A pigeon
astray in the gym
pupil’s cheer

The next issue of the Asahi Haikuist Network appears July 30. Readers are invited to send haiku about the cosmos, on a postcard to David McMurray at the International University of Kagoshima, Sakanoue 8-34-1, Kagoshima, 891-0197, Japan, or by e-mail to (mcmurray@fka.att.ne.jp).