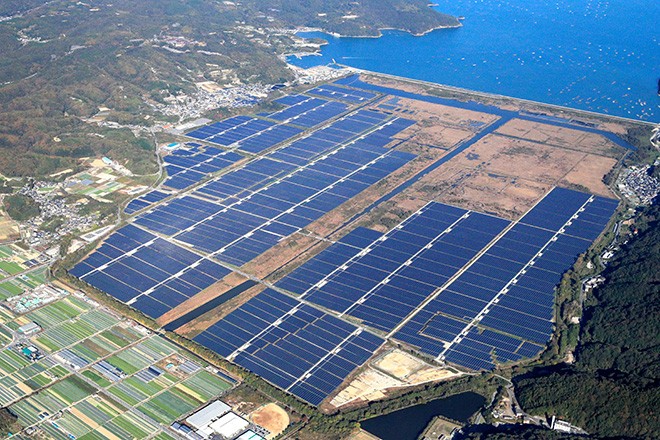 For businesses looking ahead to reduce costs, solar power would definitely seem to be the way to go. Households could possibly benefit as well.

A new estimate by the industry ministry on future costs of power generation found that solar power will eclipse nuclear energy in terms of costs as of 2030.

The finding, released July 12, is expected to have significant implications for the nation’s energy policy.

This is the first time for the Ministry of Economy, Trade and Industry to acknowledge that the cost to generate solar power will be lower than that for nuclear power.

The estimates were presented at a meeting of a working group of the Advisory Committee for Natural Resources and Energy the same day.

Estimated costs for nuclear power came to close to the 12 yen level or more per kilowatt-hour as of 2030, about 1 yen higher than the previous estimate in 2015.

The government and electric utilities have continued to champion nuclear power generation even after the 2011 triple meltdown at the Fukushima No. 1 nuclear plant, citing cost efficiency over other energy sources.

However, the latest estimates would seem to call the legitimacy of that argument into question and will likely have an impact on the government’s Basic Energy Plan, for which officials are working to revise. The Basic Energy Plan is updated almost every three years.

“The industry ministry has finally acknowledged it can no longer maintain the position that nuclear power is the most economical source of energy,” noted Kenichi Oshima, a professor of environmental economics at Ryukoku University who studies the nation’s nuclear policy, referring to the latest findings about costs.

The estimated costs for generating electricity with nuclear energy have risen each time calculations were made.

The ministry was forced to include ballooning costs for decommissioning of nuclear reactors and decontaminating crippled facilities in the aftermath of the Fukushima nuclear disaster.

But it was revised to 10.3 yen or more as of 2030 in the calculation made in 2015, based on an increase in costs for projects to enhance the safety of nuclear facilities.

In contrast, solar energy is getting cheaper.

The latest estimate for solar power was down from the previous calculation in 2015 because the costs of installing solar panels are dropping.

Charges for generating electricity are calculated as follows: the total cost of building a new power facility, operating it for decades and finally dismantling it divided by the overall amount of power produced during the period.

The ministry had clung to the belief that nuclear energy remains a reliable baseload power. The 2011 disaster put paid to that myth, however.

Even so, it said the importance of nuclear power generation remains unchanged despite an increase in costs as solar power cannot be considered reliable when the sun is not out.