Group: Use ‘plain Japanese’ in vaccine info for foreign residents 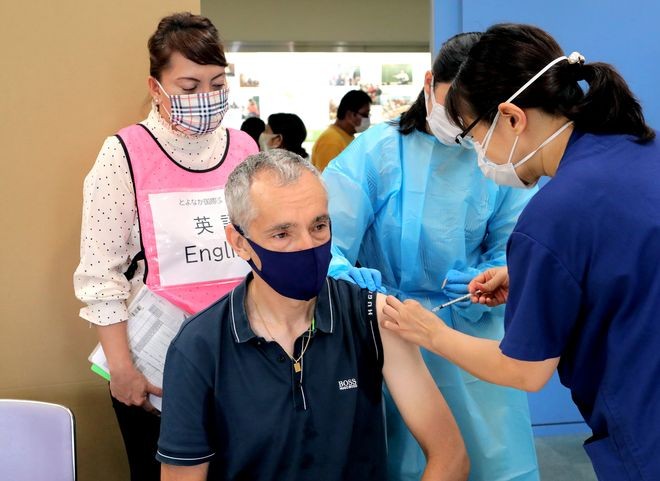 Many Vietnamese residents are facing language barriers concerning the COVID-19 vaccine program, prompting calls for simpler Japanese in notifications and instructions that non-Japanese speakers can understand.

More than 90 percent of Vietnamese in Japan wish to be inoculated against the novel coronavirus, but about 60 percent do not even know the vaccinations are free of charge, a nationwide survey on Vietnamese residents showed.

The results were released in June on the Kyoto Medical Practitioners Association website.

A group, including Vietnamese doctors working in Kyoto Prefecture, obtained about 2,000 responses through the Vietnamese Embassy and Vietnamese communities in Japan.

A combined 70 percent or so of the respondents said they feel “worried” or “very worried” about a shortage of vaccine information designed for foreign residents.

Specifically, many of them said they cannot read and understand the notices they receive through the mail at their homes.

Many also said they were concerned about possible side-effects from the vaccines.

In response to the survey results, the Kyoto Medical Practitioners Association filed requests with the central government and local governments in Kyoto Prefecture to attach multilingual explanatory notes to vaccination vouchers distributed to residents.

The association also asked that multilingual helplines and consultation services be made available, and that relevant information be shared on social media.

“The unavailability of information on vaccines is a common problem faced by all foreign residents of Japan with language barriers,” said Pham Nguyen Quy, a Vietnamese doctor with the Kyoto Min-iren Chuo Hospital, who helped carry out the survey.

The number of respondents doubled when the survey was posted on Taihen Network, a Vietnamese-language information website that is popular among Vietnamese in Japan, he added.

“To spread information, public administration services should work with communities of non-Japanese and their support groups, and they should also use social media platforms that are viewed by non-Japanese,” Quy said.

Many survey respondents also said they are concerned about possible miscommunication at vaccination venues.

Japan was home to 2.89 million foreign residents from 195 countries and regions as of the end of June 2020, meaning that about one in every 40 residents in the country is non-Japanese.

While it remains difficult to cover all of the languages, supporters are stressing the use of Yasashii Nihongo (plain Japanese), a set of guidelines for an alternative form of Japanese that can be understood more easily by non-Japanese.

Yuko Takeda, a professor of medical education with the Juntendo University graduate school, recently created an animated video to show how phrases typically used at inoculation venues could be said in Yasashii Nihongo.

The video, which runs for about two and a half minutes, was posted on YouTube earlier in July for free public viewing.

For example, a health care worker may typically tell a vaccine recipient, “Dangle your arm and ease the tension.” A simpler equivalent, accompanied by a demonstrative body movement, is: “Your arm should be like this. Ease the tension.”

A statement becomes easier to understand if it is short and does not use onomatopoeic words, such as the one associated with “dangle” in Japanese, Takeda said.

“Health care workers use many unfamiliar words,” she added. “The use of Yasashii Nihongo will allow them to be understood better not only by non-Japanese residents but also by Japanese with hearing and comprehension problems and elderly people.”

“Health care by Yasashii Nihongo,” a study group led by Takeda, is providing animated videos and a collection of phrases typically used at vaccination venues for free public access on its website (https://easy-japanese.info/covid19).