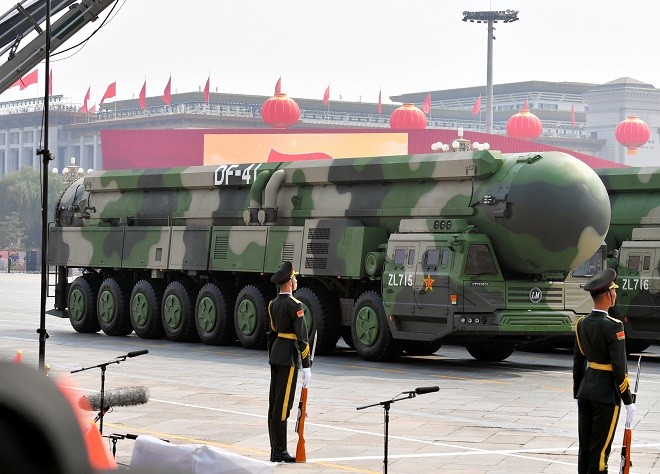 A DF-41 long-range ballistic missile appeared in the military parade commemorating the 70th anniversary of the founding of the People's Republic of China in Beijing in October 2019. (Asahi Shimbun file photo)

The reality, however, is that little progress, if any, has been made in fostering mutual trust and dialogue.

The government needs to address this disturbing situation by specifying what should be done to build a peaceful and stable relationship with China.

This year's annual review gives three times more coverage to China than to the United States in outlining the defense programs of various nations.

In the newly created section titled "U.S.-China Relations," the white paper notes that China has been stepping up its military activities around Taiwan and that the United States has made its commitment clear in supporting Taiwan. It acknowledges for the first time that "stabilizing the Taiwan situation is crucial to the stability of Japan's national security and the international community."

There is no question that Japan's foremost priority now is determining how to deal with China, whose maritime advances are escalating amid a deepening conflict with the United States.

China's defense spending is about four times greater than Japan's, easily dwarfing the Self-Defense Forces in adding hardware such as the most advanced submarines, battleships and fighter planes.

The white paper uses graphs and photos to illustrate the rapid surge in Beijing's military capabilities.

Noting that Beijing "continues to persist" in its "attempts to arbitrarily change the situation around the disputed Senkaku Islands by force," the annual review lists a set of data to show that the frequency as well as duration of the activities of Chinese Coast Guard vessels have reached record levels.

Disclosing all this information was apparently meant to help the Japanese people better understand the situation.

On the other hand, the white paper is notably short on any comments about exchanges between Japanese and Chinese defense authorities and what is being done to foster mutual trust.

The report's overall rating of China is that it poses a "strong national security concern," which remains unchanged from last year. Although there apparently was debate within the Defense Ministry on whether to change the word "concern" to "threat" or other stronger words in this year's report, the ministry ultimately opted against the change.

We believe that was the right decision.

Our reason is that while the purpose of the defense white paper is to seek the Japanese people's understanding and support of the national defense policy by clarifying the position of the Defense Ministry and the SDF on international affairs and the direction of their policies, another purpose is to convey Japan's defense-related messages accurately to the rest of the world.

This means that the use of any aggressive expression must be avoided, since it can provoke negative reactions that may well undermine mutual trust and lead to an escalation of the arms race.

As well, to avoid any accidental clash from getting out of hand, it is imperative that no room be left for any miscommunication.

The white paper mentions a Japan-China "air-sea contact mechanism," but no such hotline has been set up yet for emergencies. The defense authorities must hold talks at the earliest opportunity to bring this about.

In aiming for coexistence through cooperation instead of confrontation by force, a comprehensive strategy and multilayered approach involving diplomatic and economic measures are indispensable.

Not only the Defense Ministry and the SDF, but the entire Japanese government is being tested.