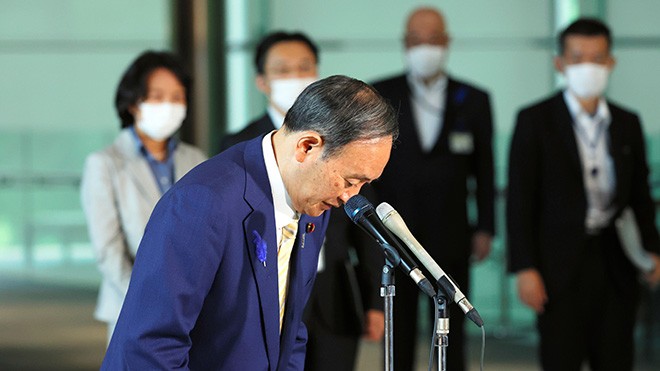 Prime Minister Yoshihide Suga apologizes for the second retraction of a government COVID-19-related proposal while meeting with reporters on July 14. (Koichi Ueda)

The Suga administration’s bumbling effort to control novel coronavirus infections suffered another blow with its retracted request to liquor wholesalers to stop transactions with bars and restaurants that refuse to temporarily shut down.

On July 8, after the government decided to declare a fourth COVID-19 state of emergency for Tokyo, the Cabinet Secretariat and National Tax Agency sent out a written request to the All Japan Liquor Merchants Association and other business groups that handle alcohol sales, asking member companies to cut off transactions with uncooperative bars and businesses.

But the association voiced its discontent to lawmakers of the ruling Liberal Democratic Party. The political arm of the association also hinted that its traditional cooperation with the LDP in national elections may not be possible for the Lower House election that must be held by autumn.

The government retracted its earlier request on the evening of July 13.

The following morning, Prime Minister Yoshihide Suga met with reporters and apologized for the trouble caused by the second retraction of a government proposal regarding alcohol-sale restrictions to control COVID-19.

Yasutoshi Nishimura, the economic revitalization minister who also heads the central government’s effort against the pandemic, had indicated on July 8 that financial institutions would be asked to cooperate in persuading bars and restaurants to follow government requests to temporarily shut down or stop serving alcohol.

Opposition lawmakers blasted the proposal as a “threat” against such businesses. The planned request to financial institutions was also retracted the following day.

The second retraction led the opposition to call for Nishimura’s resignation, but Suga stood by his minister when speaking to reporters on July 14.

“Minister Nishimura has his mind full in thinking from morning until night about how to prevent a spread of infections,” Suga said. “I believe that has led to the consideration of various proposals. What is important is to conduct careful explanations of the measures.”

Nishimura himself appeared at an out-of-session meeting of the Lower House Cabinet Committee on July 14 and said, “I express my deepest apologies to business operators for the concerns that I have caused.”

The two proposals raised by Nishimura were meant to deal with the growing problem of bars and restaurants remaining open and even selling alcohol well beyond the closing times requested by the government.

The two retractions now leave the government with nothing but the past requests that have clearly not had much of an effect in reducing pedestrian traffic in major entertainment districts of the capital.