Overseas athletes arrive to no fanfare at Olympic Village 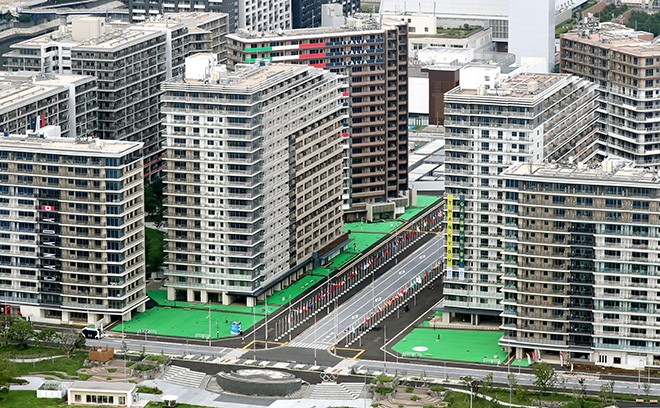 Bus after bus carrying athletes from abroad arrived at a rather empty and quiet Olympic Village in Tokyo on July 13.

Decorations set up at the accommodations in Chuo Ward for the Olympians and officials underscored the enthusiasm in preparing to welcome the delegations.

But because of the COVID-19 pandemic, flag-waving children, cheering residents and others from the public could not greet the athletes. Even media representatives were denied a chance to interview them.

“It is deadly quiet,” said a 50-year-old man who works at a seafood restaurant nearby. “There’s no enthusiasm, right?”

The 44-hectare village has 21 buildings, 14 to 18 floors tall, with a total of 18,000 beds for athletes and officials during their stay for the Tokyo Olympics.

The Olympians started checking in under windows adorned with national flags and team banners.

Such displays fueled the Olympic spirit for some people, such as 37-year-old company employee who lives in the ward and works as a volunteer in the village.

Earlier in the day, he saw a banner at a building where the Australian team will stay that says “thank you” in Japanese.

“The Olympic Village has been colored day by day. I feel the Olympics are finally here,” he said.

Outside the village, however, the mood was more somber.

“So many eateries are struggling in the pandemic,” said a 27-year-old female company employee walking nearby. “Why is only the Olympics (treated as) special?”

She said she is not interested in the Olympics and has no plan to watch any competitions on TV.

Chuo Ward officials had plans to allow the public to interact with athletes in the village. Residents folded more than 200,000 origami cranes, a symbol of world peace, to commemorate the Olympics. But they gave up on a plan to hand the cranes to the athletes because of the risk of infections.

Another plan to build a site where residents and athletes could interact at Harumi Triton Square, a complex near the Olympic Village, was also scrapped.

Instead, the ward office set up a giant QR code at an intersection for access to information about attractions and sightseeing spots.

“We hope athletes, when they ride on a bus and pass by the site, wave their smartphones and access the (information),” a ward official said.

The ward office has arranged 600 pots of Japanese morning glories raised by elementary school children to be on display inside the village.