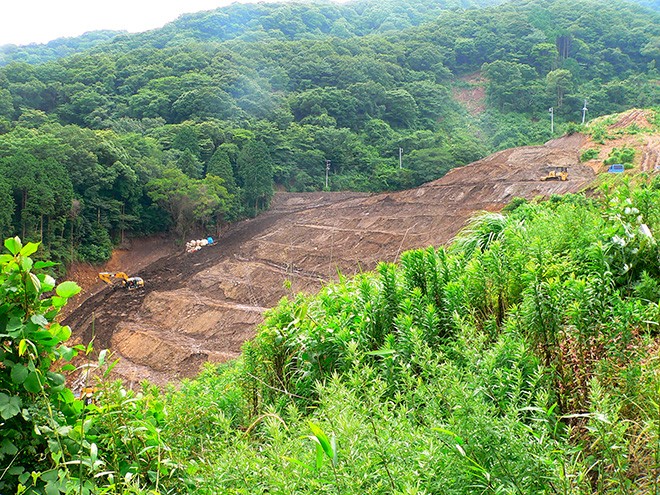 A landfill constructed in the vicinity of where the deadly landslide originated, as seen here in a picture shot in Atami, Shizuoka Prefecture, on July 8, 2010. (Provided by a reader)

The danger posed by an oversized mass of fill dirt that collapsed into a deadly landslide in Atami, Shizuoka Prefecture, this month apparently went overlooked for 11 years, photos obtained by The Asahi Shimbun show.

The images, shot by a reader in July 2010, reveal that the fill, which became the point of origin for the recent disaster, was piled up the slope and formed into a series of steps beyond what was legally permitted.

The mudslide that hit the seaside city’s Izusan district on July 3 left 11 people dead and 17 unaccounted for. It swept away 44 homes and damaged 78 others.

The prefectural ordinance for disaster defense restricts the height of landfills to under 15 meters.

But prefectural officials estimate that particular landfill constructed on the mountainside stood as high as 50 meters tall at some points, at altitudes between 350 meters and 400 meters above sea level.

While they believe the collapse of the fill escalated the damage from the landslide, the officials have said they are unaware of when the improperly constructed landfill was created.

The prefectural government has indicated it will launch an investigation into whether administrative officials appropriately handled the project.

The dozens of photos obtained were shot in July and December 11 years ago, when a business executive in Tokyo and his father who lived in Atami were hiking in the area.

At the time, a real estate company in Odawara, Kanagawa Prefecture, owned the land where the fill was built.

The company filed a plan with the Atami city government in March 2007 stating it would construct a landfill in a three-step staircase pattern, at altitudes between 365 meters and 380 meters above sea level.

But photos from July 2010 reveal that the fill dirt reached close to an altitude of 400 meters and was formed into more than three steps.

The pictures taken in December of that year, and satellite images from Google Earth shot late January 2011, offer similar evidence.

An official who represents the real estate company had not replied to a request for an interview by The Asahi Shimbun as of July 13.

An individual who runs a business in Tokyo currently owns the land. The ownership was transferred in February 2011 from the real estate company.