Delivery of Pfizer jabs to be cut 10% in Osaka, Tokyo’s Setagaya, more 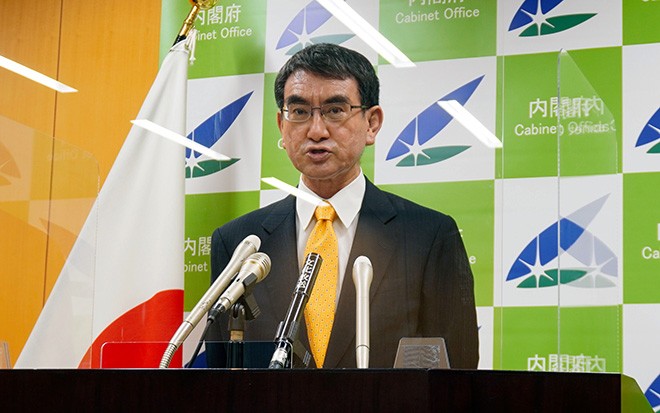 Taro Kono, the administrative reform minister who is in charge of the COVID-19 vaccine rollout, speaks at a news conference on July 13. (Junya Sakamoto)

The government will reduce the supply of Pfizer’s COVID-19 vaccine to local governments by 10 percent for the first half of August if they are deemed to have an excess stock of it.

Taro Kono, the administrative reform minister who is in charge of the COVID-19 vaccine rollout, on July 13 revealed the change in the government’s plan of distributing doses of the vaccine, jointly developed by U.S. pharmaceutical company Pfizer Inc. and its German partner, BioNTech.

Under the new plan, the central government will cut the shipment of some 350,000 doses of the Pfizer vaccine to such municipalities as Sapporo, Sendai, Nagoya, Osaka and Kita-Kyushu cities as well as Tokyo’s Setagaya, Ota and Adachi wards, according to the health ministry.

The central government previously said that it would ship about 11.7 million doses of the Pfizer vaccine every two weeks in August and September and distribute 80 percent of the doses, or around 9.36 million, as a “base supply” to prefectural governments in proportion to their populations.

The central government had also indicated that Pfizer shipments would be cut by 10 percent for local governments that have more than six weeks’ worth of excess stock as shown by its vaccination record system (VRS).

The 350,000 Pfizer doses that the central government will stop supplying to local governments with an excess stock will be added to 1.755 million doses categorized as “adjustment supplies” for prefectural governments.

Each prefectural government will allocate the adjustment supplies to municipalities.

The central government said it is currently preparing to enable prefectural governments to access the VRS to facilitate a smooth distribution and to share the number of shots administered and other data starting on July 15.

The VRS, however, has proved ineffective in revealing the stock of vaccine doses in real time, due to delays at the municipal level in entering vaccination data into the system in some cases.

Kono has called on municipalities to quickly enter the data on the VRS. But the central government will likely face a backlash from those targeted for a reduction in vaccine supply under the new distribution plan.