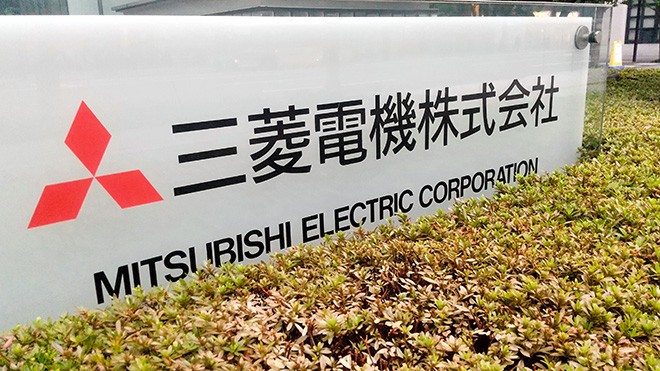 The logo for Mitsubishi Electric Corp. (The Asahi Shimbun)

He told employees that whistleblowers would not be punished, according to sources.

Takeshi Sugiyama’s videotaped message was distributed internally on July 13 to ask for cooperation from workers after the latest in a spate of scandals involving falsified data among Mitsubishi Electric group companies emerged last month.

Sugiyama, who announced at a July 2 news conference that he would resign as early as this month to take responsibility for the misdeed, said in the video that this is the “last chance” for the group companies to regain public trust, the sources said.

A Mitsubishi Electric public relations official acknowledged the message issued by Sugiyama, but added the company has no plans to make its details public.

“It was a message from the top management to undertake a sweeping reform of corporate culture concerning quality control by all member companies,” the official said in characterizing the video.

The latest instance revolved around faking test data when supplying train companies with air conditioning equipment, which apparently went on for more than 30 years.

The equipment was manufactured at Mitsubishi Electric’s plant in Nagasaki Prefecture, but no tests have been conducted there since the 1980s to see if the units met the standards set by railway companies.

In the message, Sugiyama asked employees to “reveal all the inconvenient facts that have been ongoing on the ground now,” according to the sources.

He called it “extremely regrettable” that upper management had failed to grasp the wrongdoing that emerged from previous investigations when similar scandals hit the company and other member companies.

Mitsubishi Electric is set to open an extensive probe into the falsified inspection data and other possible fabrications by sending a questionnaire to all employees.

It is believed that the company will also carry out digital forensics to recover data from deleted emails.

The investigation will be led by a team headed by an attorney outside the company. Sugiyama said the investigation team will not share tip-offs from employees with their colleagues and superiors.

Management became aware of the latest malfeasance in the middle of June.

But it did not explain it at a general shareholders meeting on June 29.

Sugiyama‘s successor has yet to be decided on, but it is highly likely a senior official within the company will take over the post, according to the sources.

The latest scandal broke out as Mitsubishi Electric celebrated its 100th anniversary this year.

Mitsubishi Electric is an iconic manufacturer in Japan, making an array of products from household appliances to defense equipment.

While falsified inspection data was also detected in other leading manufacturers, the Mitsubishi Electric group sits apart from the rest. It has been embroiled in similar data-faking scandals that have surfaced repeatedly over the past several years--including one that came to light in February 2020 at Mitsubishi Electric itself.

At the general shareholders meetings, a shareholder blasted management for allowing the company turn into a “department store of scandals.”