Tokyo highway tolls to rise 1,000 yen from July 19 for Olympics 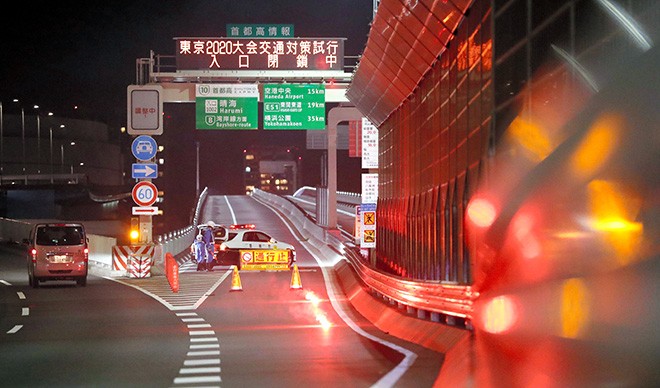 Officials test out measures to alleviate congestion on the Metropolitan Expressway in Tokyo in July 2019, ahead of the 2020 Olympics and Paralympics. (Asahi Shimbun file photo)

Tolls for the Metropolitan Expressway in the Tokyo area between 6 a.m. and 10 p.m. will increase by 1,000 yen ($9.05) from July 19 as part of measures to ease traffic congestion during the upcoming Olympics.

Meanwhile, the existing expressway toll between midnight and 4 a.m. will be halved under a “road pricing” system that adjusts tolls depending on the time of day during the Games, which kick off on July 23.

Traffic volume is likely to drop in the greater Tokyo metropolitan area as the Olympics will be held without spectators at venues in the capital and three surrounding prefectures and a new COVID-19 state of emergency was issued for Tokyo on July 12.

Still, the expressway operator decided to adopt the system at the request of the Games’ organizing committee.

“It is necessary to smoothly transport athletes and staff for the Games since automobile traffic volume is returning to pre-pandemic levels,” said an official.

Regular tolls for standard-size cars using the electronic toll collection (ETC) system on the expressway range from 300 yen to 1,320 yen.

The road pricing system will start on July 19, four days before the Opening Ceremony, and continue until Aug. 9, the day after the Closing Ceremony.

The new tolls will also be in effect during the Paralympics from Aug. 24 to Sept. 5.

Standard-size cars and motorcycles are targeted for the hike in tolls under the system. Mid- or large-size vehicles for business use are exempted from the additional charges.