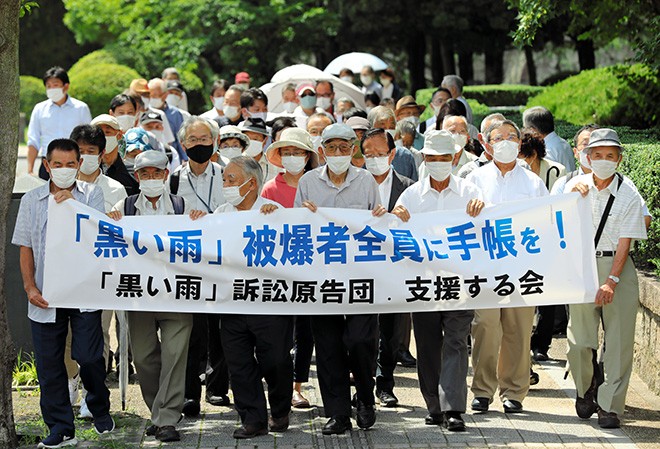 The court threw out an appeal by the Hiroshima prefectural and municipal governments that challenged the ruling.

In July 2020, the Hiroshima District Court ruled that all 84 plaintiffs should be recognized as hibakusha and said the government standards regarding black rain used in defining eligible atomic bomb survivors lacked rationality.

The Hiroshima prefectural and municipal government, which carried out the administrative matters on behalf of the central government in providing relief to hibakusha, appealed the district court ruling and contended it was not based on sufficient scientific knowledge.

But the Hiroshima High Court on July 14 upheld the district court ruling, which overturned the central government standard for recognizing hibakusha and led to the establishment of a panel to look into whether new standards were necessary.

The original lawsuit, filed in 2015, challenged the central government’s position that defined and limited who could be considered hibakusha because of the black rain that fell on Hiroshima shortly after the atomic bombing on Aug. 6, 1945.

The government had maintained that the only people eligible for the recognition were those who lived in an area delineated by local meteorologists where they said heavy rain fell.

The 84 plaintiffs in the lawsuit, including bereaved family members who took over for original plaintiffs who died before the ruling, all lived outside the area designated as where the heavy rain fell.

In 2008, the Hiroshima prefectural and municipal governments conducted a joint study of about 37,000 residents. It concluded there was a possibility black rain fell on an area about six times the size of the defined area that the central government used to determine eligibility for being recognized as a hibakusha.

The court also pointed out the plaintiffs could have become exposed to radiation not only externally through the black rain, but also internally by ingesting water that had been contaminated by radiation.

The district court also checked on the medical records of the plaintiffs and heard testimony about their location when the black rain fell. It also presented a framework for determining if a resident was a hibakusha based on diseases, such as cancer, that are normally used in defining hibakusha.

Recognition as hibakusha makes the plaintiffs eligible for free medical treatment and other benefits.

(This article was written by Kazutaka Toda and Yuto Yoneda.)