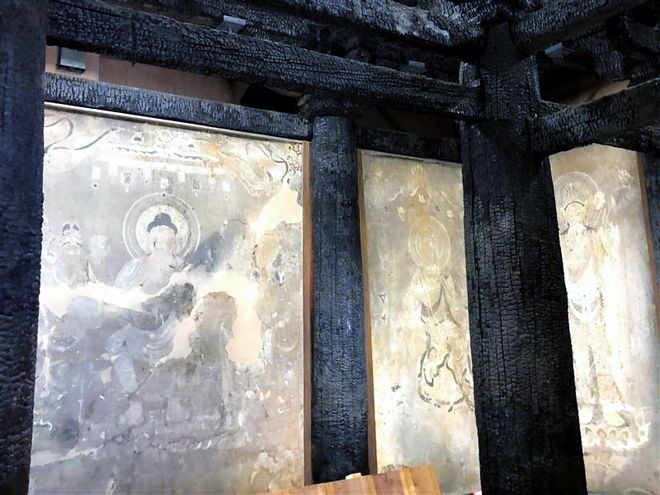 Among murals kept at the treasure house are the large No. 10 painting, left, which shows the Bhaisajyaguru Pure Land; the smaller No. 11 Samantabhadra picture, center; and the No. 12 11-face Kannon mural. (Provided by Horyuji temple)

IKARUGA, Nara Prefecture--A lucky few will get an exclusive viewing of fire-damaged murals that are set to go on limited display at Horyuji temple here.

The murals are called one of Asia's most significant Buddhist art treasures.

A total of 500 people who make donations of 10,000 yen ($90) to a crowdfunding campaign will be invited to see the murals at the temple, a UNESCO World Heritage site,  in November.

Horyuji's goal is to solicit funds to cover study and research costs in preparation for envisioned unlimited future displays of the murals, according to details of the campaign, organized with assistance from The Asahi Shimbun, which were unveiled on July 9.

The murals of Horyuji’s Kondo are believed to have been created from the latter half of the seventh century to the early eighth century and are state-designated important cultural properties. The Kondo main hall is a national treasure.

The special session will mark the first step toward future public viewing of the pictures partially destroyed by blazes in 1949 and will last for 11 days within the storehouse on Horyuji’s grounds.

“The murals have an extreme importance, so I would like many people to learn about them to contemplate how significant cultural properties they are,” said Shokaku Furuya, 72, Horyuji's chief priest. “I hope they are protected via the support of a lot of citizens.”

The exhibition plan was announced by the Kondo mural conservation and utilization panel headed by Yoshitaka Ariga, a visiting professor of art history at Tokyo University of the Arts, on July 3.

The historical asset comprises four large paintings as well as eight smaller pictures drawn on the total of 12 screens at the outer chamber of Kondo, which honors the Shakyamuni triad statue as the main object of worship.

The murals reproduce the Buddhist Pure Lands for Buddha, Amitabha, Maitreya and Bhaisajyaguru.

When a fire broke out inside Kondo on Jan. 26, 1949, almost all hues on the mural surface disappeared. The cultural property protection law was introduced the following year in 1950 amid increased awareness of the need for preservation of historic artifacts.

The burnt walls and pillars from Kondo were then put in storage at the warehouse built in 1952, and the date of the disaster was registered as the fire prevention day for cultural assets in 1955.

While conserving the damaged murals in the storehouse, Horyuji started a joint effort to make their copies with The Asahi Shimbun in 1967. Replicas by such painters as Yukihiko Yasuda, Seison Maeda and Ikuo Hirayama were devoted to Kondo in 1968.

In 2015, Horyuji set up the mural preservation and utilization committee with the assistance of the Agency for Cultural Affairs and The Asahi Shimbun to discuss making the paintings accessible to the public.

The board carried out temperature and humidity simulations as part of its warehouse environmental survey in the last fiscal year.

Results recently released from their study show that a plan to have 10 people view the murals at a time in November will bring about no significant temperature changes, compared with those under the no-visitor conditions. The humidity level would return to normal two months following the end of the exhibition in the estimate.

For that reason, the panel concluded that rendering the facility open to visitors to a limited extent will pose little risk of the murals deteriorating.

The findings from the upcoming display will be reflected on among other data to decide whether to allow many more people to view the paintings in the future with an eye on renovating the storehouse.

Up to 10 individuals at one time will be allowed to view the murals, with a 30-minute viewing time, when new visitors will replace the previous group.

A total of 500 spectators will be admitted between Nov. 10 and Nov. 21. The special viewing plan will not be offered on Nov. 15.

Contributions for the temple will be accepted in two rounds on the Asahi Shimbun crowdfunding platform A-port with a total target of 5 million yen. The campaign will end after it has received 500 donors.

(Takumi Okada contributed to this article.)