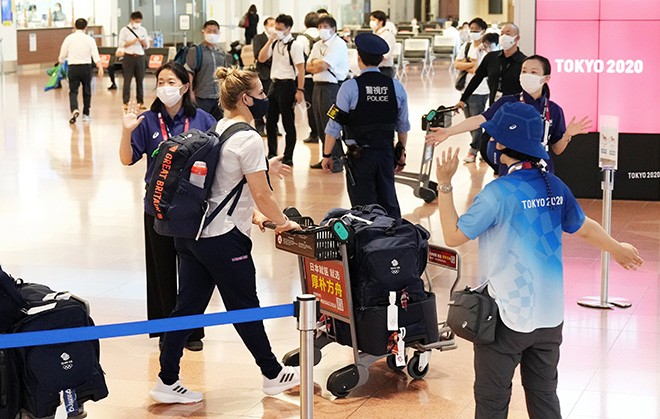 Olympic athletes are guided by staff members after arriving at Haneda Airport in Tokyo on July 14. (Takuya Isayama)

Metropolitan government officials said the latest number not only exceeded the May 13 tally of 1,010 new infections, but it also topped the peak in the fourth wave of the infections, which was 1,121 set on May 8.

The seven-day average of new cases over the week through July 14 was 823.3, an increase of 30.3 percent from the previous week.

This is the first time the seven-day average has surpassed 800 since the week to May 16, which had a daily average of 806.4.

The infection trajectory showed signs of a rebound soon before the third state of emergency was lifted on June 21, and restrictions on the movement of people were eased.

On July 10, 950 new cases were reported in the capital, then the highest level since the lifting of the state of emergency.

Two days later, the fourth state of emergency was declared for the capital.

Concerns have continued to grow about a further spike in new cases in the coming days. Crowds have not thinned significantly in Tokyo’s entertainment districts since the fourth state of emergency was issued. In addition, the more contagious Delta variant is fast sweeping through Tokyo.

Four new deaths from COVID-19 were confirmed in Tokyo on July 14.

The number of serious COVID-19 cases in the capital requiring ventilators or an extracorporeal membrane oxygenation (ECMO) device, which circulates blood through an artificial lung, stood at 54, down by four from the previous day.