VOX POPULI: Games being held when even going to the beach still banned in Japan 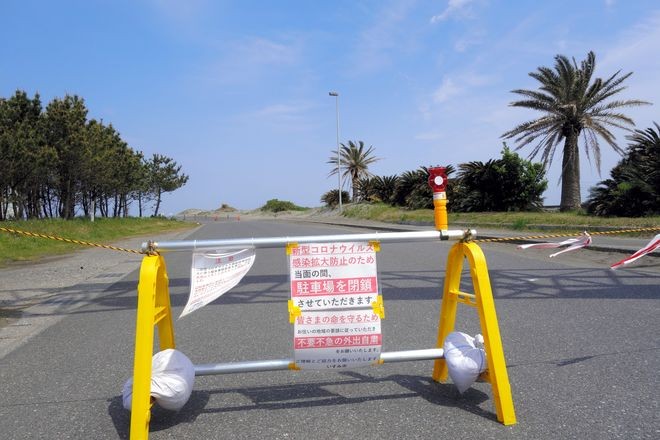 An empty parking lot where entry is banned near the beach in Isumi, Chiba Prefecture, in 2020 (Hirokazu Inada)

Famed for its good surf and white sand, the municipal beach of Katsuura in Chiba Prefecture teems with 200,000 to 300,000 visitors in normal years.

But for Yuki Yoshino, 23, a staffer at the city's tourism and commerce department, the last three months were stressful.

Day after day, she agonized over whether to open the beach to the public this summer.

She had no such dilemma last year. Following the government's first declaration of a COVID-19 state of emergency in April, all municipalities in the prefecture decided to keep their beaches closed.

But with mass vaccinations now in progress, this summer is different. Any official in charge of tourism would naturally want to lure families and surfers to their beaches.

Normally, Katsuura's municipal beach is officially opened in mid-July. For this year, Yoshino considered postponing it to August and reducing the number of cars allowed in the parking lot.

She then visited eight local leaders, including the director of the tourist association and the mayors of the city's wards, and sought their opinions.

"I fear an influx of people from the big cities will put our people at risk," one official said. "Our community is aging, and we can't secure enough personnel for infection control," noted another, while yet another pointed out, "The last thing we ever want is a cluster infection starting on one of our beaches."

Not one comment was made in favor of opening the beaches to the public.

Until early spring, however, the city was leaning toward readying its beach for the summer crowd. But that all changed at the eleventh hour.

"Allowing visitors will certainly bring life back to our city, but everyone I consulted was really serious about stopping the virus from spreading," Yoshino recalled.

Even though marine leisure is big in Chiba Prefecture, different cities, towns and villages have reached different conclusions about what to do this summer.

A monument inscribed with a poem by Akiko Yosano (1878-1942) stands on a hill that offers a panoramic view of Katsuura Bay. The verse goes to the effect, "Oh beautiful Katsuura/ The mountain extends its green, gentle hands/ To cuddle the sea and the town."

With such a splendid beach spreading right before one's eyes, it's a terrible shame that it can't be enjoyed this summer.

Across Japan, there are roughly 1,000 beaches for swimming. Whether they will be open or not, this is a summer of torment.

In the meantime, preparations for the Tokyo Olympics are continuing steadily. My head spins from an acute sense of disconnect.