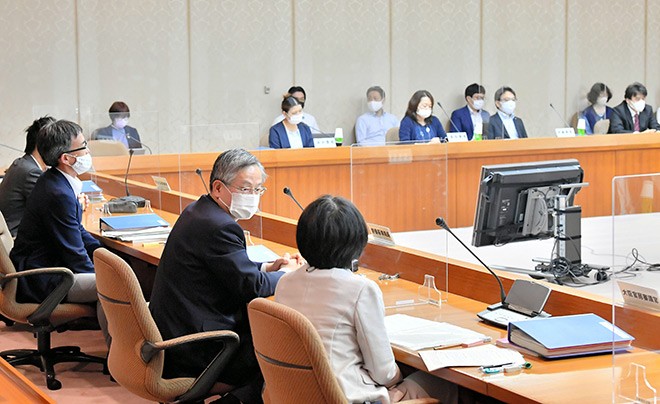 Members of a labor ministry council discuss increasing the minimum wage at a meeting in Tokyo on July 14. (Pool)

A government council set a guideline to raise the minimum hourly wage across Japan by 28 yen to 930 yen ($8.46) on average, a record-high increase lauded by unions but blasted by business groups.

The Central Minimum Wages Council’s subcommittee of the labor ministry on July 14 decided on what would be the biggest raise for the weighted average of the minimum wage since the current system started in fiscal 1978.

Last year, the council failed to set a guideline due to the economic repercussions of the novel coronavirus pandemic, saying it was “appropriate to maintain the current level.” As a result, the national average rose by just 1 yen.

But the council this year urged prefectural governments to commit to drastic pay hikes based on the government’s policy.

The minimum wage is the lowest hourly remuneration an employer is legally required to pay its workers.

Prefectural governments decide on minimum wage levels in their jurisdictions based on guidelines set by the government council.

Normally, guidelines are established for four groups of prefectures depending on the area and its cost of living. But this time, the guideline of a 28-yen increase was recommended for all groups.

If the guideline is followed, the minimum wages of all prefectures will exceed 800 yen an hour.

A 28-yen increase would give Tokyo a minimum wage of 1,041 yen an hour, the highest in the country, while seven prefectures would have the lowest, at 820 yen.

“The necessity of a higher minimum wage was recognized even amid the pandemic,” said Tamayo Tomita, a representative of Rengo, the Japanese Trade Union Confederation, who sits on the council subcommittee.

She said the move was “one step forward” toward at least 1,000 yen per hour for everybody.

The Japan Chamber of Commerce and Industry and two groups representing midsize and small companies released a statement that said the guideline “cannot be tolerated at all.”

“The conclusion simply followed the government’s policy to increase the minimum wage, and we can’t help but question the makeup of the council and how it decides on minimum wages,” the statement said.