Photos reveal Atami landfill lacked safeguard when it was built 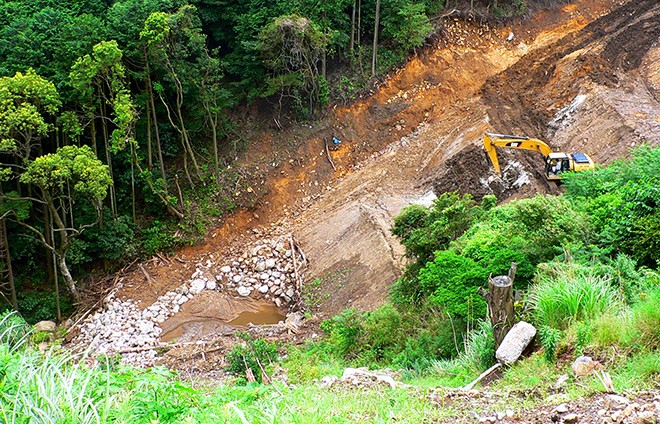 An image shot on July 8, 2010, shows the area of the bottommost part of the landfill that collapsed and caused a deadly landslide in Atami, Shizuoka Prefecture, this month. (Provided by a reader)

Photographic evidence suggests the landfill that collapsed in a deadly landslide in Atami, Shizuoka Prefecture, was built without a retaining structure in place, despite that the official construction plans had promised the safety measure.

The photos, obtained by The Asahi Shimbun, were shot in July 2010 as the landfill was being built.

An expert who inspected the images said he could not locate the earth-fill dam that was supposed to be installed at the base as a protective barrier in the event of a collapse.

“From these photos, we cannot confirm the existence of an earth-fill dam,” Toshitaka Kamai, a professor of applied geology at Kyoto University’s Disaster Prevention Research Institute, said on July 14.

The oversize mass of fill dirt built on the mountainside in Atami became the point of origin for the July 3 disaster that left 11 people dead and 16 still unaccounted for. The collapse of the landfill followed several days of heavy rains there.

Prefectural officials said its construction was largely completed by August 2010--which means the pictures reveal what the landfill looked like when it was nearly finished.

A real estate company in Odawara, Kanagawa Prefecture, had obtained ownership of the land in 2006 and then filed plans with the city the following year to build the landfill.

According to the prefectural government and other sources, the construction plan stated that a dam would be built at the lower part of the landfill as a safety measure.

Some of the dozens of photos, which were shot by a Tokyo business executive and his father who lived in Atami while they were hiking, show the area around the bottommost part of the landfill.

Although there were stones and a puddle at the base, no dam could be seen in the photos.

Kamai said he believes the puddle was formed by water from a spring, suggesting it would be difficult to build an earth-fill dam there.

“Even if workers tried to build a dam there, it would have been difficult, given the instability of the ground,” he said.

In the construction of a landfill, it is standard procedure to build a dam first before proceeding with the rest of the work.

Shizuoka prefectural officials have said they are “uncertain” about whether the dam was ever built.

A senior prefectural official involved in the response to the landslide disaster said in an interview, “As much as I look at the images (in search of one), there is no earth-fill dam.”
The photos also show that the landfill stood taller than what was legally allowed.

The prefectural government plans to investigate into the landfill project’s background, if adequate safeguards were put in place to prevent a disaster, and whether Atami officials had responded appropriately.

Shizuoka Vice Governor Takashi Namba suggested at a July 14 news conference that the handling of the project by Atami officials might have been flawed, contributing to the mudslide.

“Bad weather, the inappropriately constructed landfill and the failure of administrative officials to detect it together caused the massive disaster,” he said.

He said it is a “must” to investigate whether local officials dealt with the project appropriately and exercised proper oversight.

“All the information must come out and officials must be held accountable for what they are to blame,” he said.