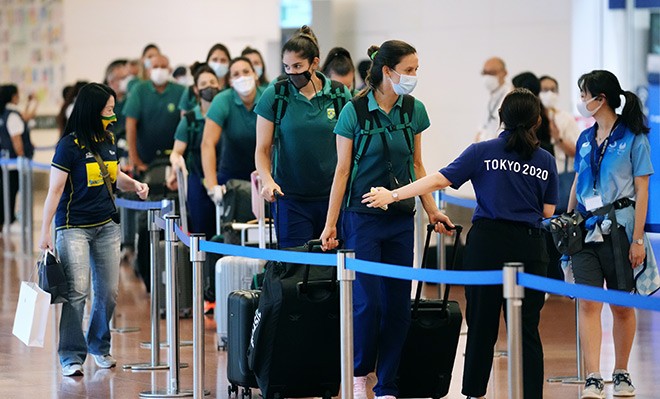 The “bubble” that is supposed to contain Olympic athletes and related officials to prevent the spread of the novel coronavirus has already burst.

Even a week before the start of the Tokyo Games, it has become clear that organizers’ plans to separate Olympic-related people and the general public are failing miserably.

Chaos has often ensued at airports among staff trying to guide Olympic delegations. Hotels are at a loss over how to check for COVID-19 rule-breakers among their guests from abroad.

And the situation is expected to become more complicated as additional Olympic-related visitors arrive in the country ahead of the Opening Ceremony on July 23.

A Brazilian Olympic delegation landed at Tokyo’s Haneda International Airport on the morning of July 14, and the delegates used an “airport staff only” gate to reach the arrival lobby.

After around 50 hand-waving volunteers greeted them, the delegation proceeded along a route about 2 meters wide, separated from the other passengers.

But along the way, some of the Brazilians stopped to take selfies and fist-bumped with the other passengers.

The scene surprised one sports fan who came to the airport to catch a glimpse of the Olympians.

“I thought they were using a bubble system,” said the woman in her 50s. “I am surprised because I thought they would be kept out of sight and use a hidden route.”

However, fist-bumping is just one of the many problems facing staff tasked with guiding foreign delegations through the airport entry process.

Many of the liaisons are employees of travel agencies that have been commissioned for the job by the Tokyo Organizing Committee of the Olympic and Paralympic Games.

The liaisons hold up signs that say, “Tokyo 2020 Athletes,” for the arriving Olympic delegations to see.

Larger delegations are easier to handle because there is usually a time gap between the deplaning of the teams and the general passengers.

But athletes of smaller delegations often get mixed in with general passengers when they move out of the gate.

One veteran liaison shouted instructions to less-experienced staff at Narita on the morning of July 13: “Keep calling out to arriving passengers! And get the Olympians and related officials because they are mixed in!”

Liaisons not only confirm the country of a delegation and the number of expected arrivals, but they also make sure the visitors are using OCHA, a special tracking app designed to keep the Olympic bubble intact.

But things do not always go smoothly.

A liaison and a Cabinet Secretariat employee lost their cool and scrambled around for answers after a delegation landed with fewer people than expected.

They eventually learned that several people had made last-minute cancellations.

Some delegates who were not on the arrival list have slipped out from the group and headed to a quarantine station with the general passengers.

Others have used restrooms without telling anyone and were believed “missing.”

“Sudden cancellations and unexpected arrivals happen all the time,” a Narita Airport official said. “We even had an unscheduled arrival of a delegation of several dozen people.”

The airport official also said it is a mystery who is actually in charge of managing the arrival schedules of the delegates.

“Is it the organizing committee or their host town? I don’t really know,” the official said.

‘BUBBLE’ IN NAME ONLY

The situation surrounding the South African men’s rugby team has underscored the impossibility of keeping both the athletes and the public completely safe from the novel coronavirus.

The 21 members of the Springbok Sevens tested negative for the virus upon their arrival at Narita Airport on July 13, and they were on their way to a pre-Olympic camp in Kagoshima.

But after a passenger on the same flight tested positive for the virus, 18 members of the delegation were told they were likely exposed to the contagion.

The training camp was canceled, and the entire team has been isolated at designated accommodations.

A central government official in charge of border controls admitted that the “bubble” is in name only.

“It is impossible to completely cut off the Olympic delegations from the general passengers,” the official said.

Hotel workers are also exasperated by their supposed roles in maintaining the bubble around Olympic delegations.

One hotel manager in Tokyo is always worried when watching Olympic-related guests entering and leaving the premises.

The hotel currently hosts 93 people, many of them workers for foreign media organizations and sponsor companies. The number is expected to rise to around 200, half of the hotel’s capacity.

According to the Olympic organizers’ “playbook” of rules to control COVID-19 infections, Olympic-related visitors from abroad are banned from using public transportation and going out without first obtaining permission from the organizers. These rules apply for the first 14 days of the visitors’ stay in Japan.

But who is supposed to ensure they are complying with the rules? And how does one check a person’s date of arrival in Japan?

“There is no way for the hotel staff to know,” the hotel manager said. “It’s not even our job to begin with.”

A lone private security guard dispatched by the Games’ organizer stands at the entrance of the hotel to watch the movements of Olympic-related guests.

“But it’s not realistic to check everybody, is it?” the manager said.

So far, the guests who appear to have arrived within 14 days have largely complied the playbook rules and only gone out using a specially arranged vehicle, the manager said.

However, Olympic-related people have recently been recorded by TV cameras taking strolls outside the bubble of the Olympic Village.

Tamayo Marukawa, a state minister who is in charge of the Tokyo Olympics, vowed on July 15 to take disciplinary action against those who break the playbook rules.

“I have urged the organizing committee to quickly identify the subjects and severely punish those involved,” Marukawa said at a session of the Upper House Cabinet Committee.

She also said she is seeking tighter controls at accommodation facilities and creating fliers so that athletes and officials can more easily understand the playbook rules.

However, Ayaka Shiomura, a lawmaker of opposition Constitutional Democratic Party of Japan, demanded that the entire playbook be revised.

“The (Olympic) bubble is full of holes. We need to prevent a further spread of infections in Tokyo at all costs,” Shiomura said.

The inevitable increase in visitor traffic will make it even more difficult for accommodation facilities to distinguish who is still under the 14-day rule and who has entered Day 15, the hotel manager said.

Technically, the hotel can ask guests to show the OCHA app to determine how long they have been in the country.

“But for us, those people, even though they are involved in the Olympics, are valuable and paying customers. As a hotel, we cannot do that,” the manager said.

The manager’s anxiety, in fact, started rising in late June, well before hundreds of Olympians started arriving in Japan.

The hotel became a designated accommodation facility for Olympic officials years ago.

But it was only in late June when the organizing committee told the hotel to make an entrance available only for recent visitors to the country and to separate them from domestic guests in elevators and dining halls.

The hotel said that would be impossible to do, but it never heard back from the organizers.

The hotel scrambled to implement a simplified check-in system to reduce contact between the guests. It also set up different dining times for Olympic-related guests and other visitors.

However, the hotel could only do so much on such a short notice, the manager said.

“We want to cooperate as much as possible, but we can’t do all.”